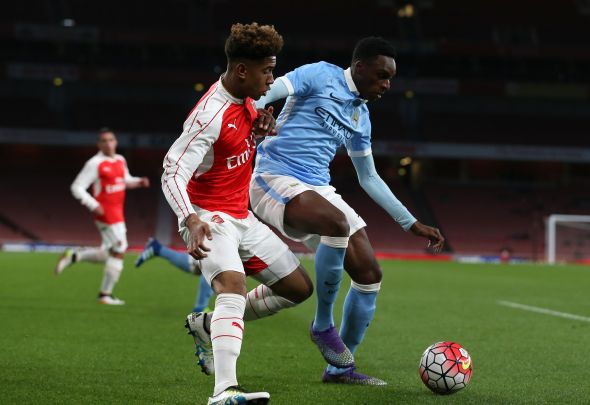 Arsenal could be dealt another blow this transfer window with the news that Reiss Nelson is now attracting interest from some of Europe’s biggest clubs, according to a report.
The Daily Mail believes that the Gunners youngster could be lured away from London as both Real Madrid and Paris Saint-Germain are keen on acquiring the services of the forward.
Nelson is now in the final 18-months of his current contract and there has been little movement in the way of extending his deal with the north London outfit.
The young attacker has made 11 appearances in all for the Gunners this season and is yet to make his debut in the Premier League.
Arsenal could see Alexis Sanchez, Jack Wilshere and Mesut Ozil walk away from the club in the summer, all three have been linked with moves elsewhere.
Football Insider verdict:
The contract situation at Arsenal is getting ridiculous now and Arsenal really need to show their up and coming stars as well as their current stars that they are a valued asset to the club. That being said, it is unlikely that at such a young age Nelson would be tempted into a move away from the Gunners, where he has been with since he was nine-years-old and it is fully expected that Arsene Wenger and co. will eventually do what it takes to convince the highly-rated youngster that his future is in north London and not elsewhere.
In other Arsenal transfer news, details emerge of Gunners swap deal.
We’ve launched a << BREAKING NEWS FEED>> exclusively for your club. ‘Like Us’ on Facebook by clicking here if you want 24/7 updates on all Tottenham breaking news.