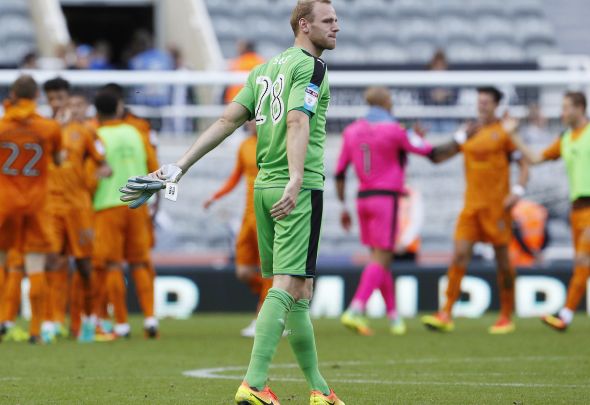 Anderlecht are looking to end Matz Sels’ Newcastle nightmare this summer by bringing him back to Belgium, according to a reliable journalist.

Kristoff Terreur, who writes for Belgian newspaper HLN, revealed on his personal Twitter account that Anderlecht are keen on signing the 25-year-old goalkeeper.

However, he quoted Anderlecht director Herman Van Holsbeeck as saying that a move could prove to be difficult.

“He’s a good goalkeeper, but a deal will be complicated,” Van Holsbeeck stated.

Anderlecht are interested in Matz Sels. Director Herman Van Holsbeeck: "He's a good goalkeeper, but a deal will be complicated." #nufc pic.twitter.com/UzNKQ9IYiE

Sels has endured a difficult spell in England after becoming Rafa Benitez’s first signing of the summer for a fee of £5million from Europa League outfit Gent.

Starting the season as the Toon’s number one, Sels failed to adapt to the rigours of Championship football and immediately grew an unwanted, error-strewn reputation.

It has seen the uncapped Belgian plummet down the pecking order at St. James’ Park, with Karl Darlow and Rob Elliot now considered ahead of the Toon’s number 28.

With Freddie Woodman and Tim Krul set to return to Tyneside from loans and potential new signings in goal, Sels could be offloaded this summer.

However, it remains in what capacity that the Magpies would axe Sels, as he has four years remaining on his current deal in the north east.

After purchasing the lofty goalkeeper for £5million, if Benitez can claw back around £3million then it would be good business. The goalkeeper has simply not coped with the physical demands of playing in England and with competition aplenty in goal, selling him is the best option for all parties involved. Former Real Madrid boss Benitez needs all the spending power he can get as he looks to bring in the players capable of steering his side clear of a relegation fight.

In other Newcastle transfer news, the Toon are said to be monitoring this 27-year-old Arsenal ace.