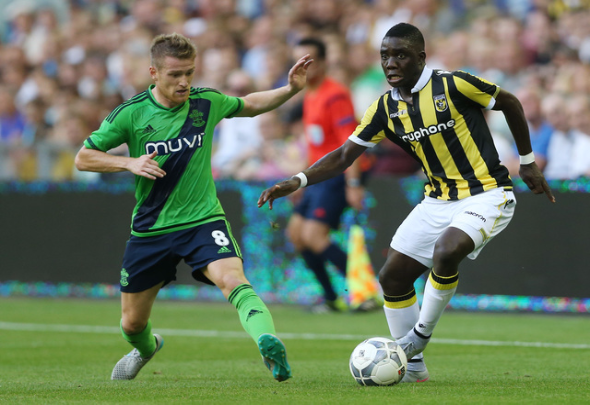 Everton are eyeing Vitesse midfield starlet Marvelous Nakamba, according to a report.

Dutch publication Gelderlander has named the Toffees alongside four other European clubs as interested in the 22-year-old.

These clubs include German giants Wolfsburg alongside the highly reputable Turkish side Galatasary.

Nakamba is clearly rated by many at his young age and has been ever-present for the Eredivisie side this season with 18 appearances for the club.

He is a defensive midfielder, so rarely contributes up the field, but he does also have a goal and an assist for his side this campaign.

He also has three appearances for the Zimbabwe national team and is a full international with his career only just starting.

Nakamba’s contract is set to expire in the summer of 2018, meaning that his value will plummet in the next window.

However, Vitesse technical director Mohammed Allach has said that no sides have made contact with him for their star player this window.

“Marvelous plays a crucial role in our team,” said Allach to Gelderlander.

“The buzzing with rumours, but so far no club has yet reported to us.”

It is believed that Everton are looking for a new midfielder this window and they have been strongly linked with a move for Morgan Schneiderlin.

The Toffees currently have Idrissa Gueye and Gareth Barry as their two central midfielders, but the former is now off to the AFCON for a month, while there has been some criticism aimed at the 35-year-old Barry in recent times.

Nakamba would help improve a very weak are of the Everton team if he was to move. The centre of the park is one of the key areas for any football team, but the likes of Darron Gibson and Tom Cleverley are not good enough even as backup at Premier League level. Little is known of Nakamba outside of Holland, but he is an international and is considered one of the key players of his team at his early age. Manager Ronald Koeman also has a good knowledge of his home nation and has previously brought a number of quality players over to the Premier League, including Graziano Pelle and Dusan Tadic. The Toffees must now go out to secure their midfield targets before the club starts missing Gueye too much.

In other Everton transfer news, this Toffees wonderkid is expecting signings in January.