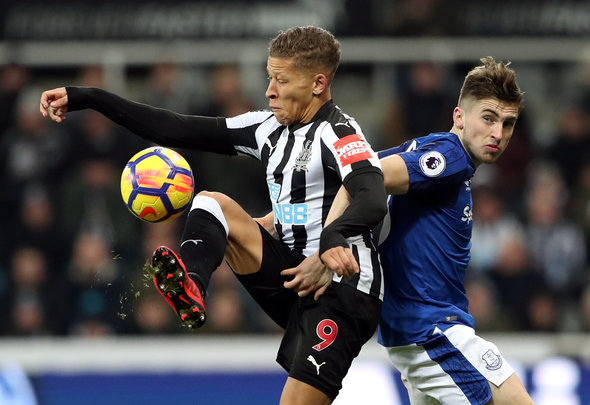 Everton fans have turned to social media to voice their delight at the performance of Jonjoe Kenny in the Toffees’ 1-0 win at Newcastle United on Wednesday.

Wayne Rooney, in a rich vein of goal scoring form in recent weeks, was on hand to make the most of a goalkeeping error from Karl Darlow and poke the ball into the back of the net from close range in the first half.

Despite their best efforts, the Magpies were unable to find a way through the Toffees’ back line, which consisted of the experienced Cuco Martina and Ashley Williams being partnered with the young Mason Holgate and Jonjoe Kenny.

It was the 20-year-old right back, making his 14th appearance of the season across all competitions, which caught the eye of the Everton faithful, as they took to Twitter to demonstrate just how impressed they were with the hot prospect’s display.

Anyway. Mason Holgate, Jonjoe Kenny and Dominic Calvert-Lewin have been tremendous recently. Long may that continue.

Another stormer from jonjoe, defendings spot on just needs to work on goin forward more.

Holgate was superb tonight and Williams was probably even better. JonJoe quality again too. Just to think though, a lot of us didn't think Sigurdsson/Rooney could play together! 👍👏

Jonjoe Kenny & Holgate are excellent! Need to get another here though #Everton #Newcastle

The young right back, a graduate of Everton’s youth system, has a total of 17 appearances under his belt for the Toffees since breaking into the senior side, as well as four outings for England’s under-21 side, but is yet to find the back of the net for his boyhood club.