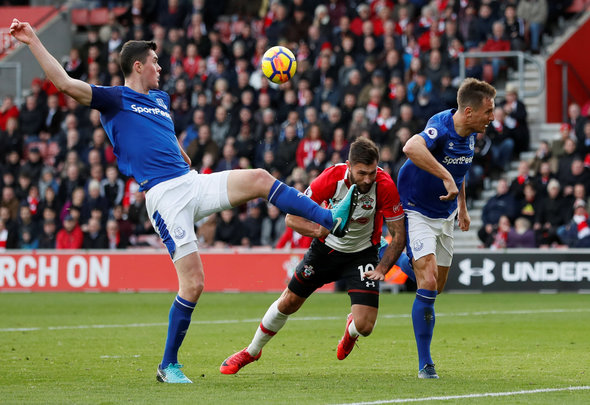 Everton fans took to Twitter to destroy Michael Keane for his performance in their team’s 2-1 Premier League defeat to Burnley on Saturday.

Defender Keane was named in the starting XI against the club he left in a £30million transfer last summer as he partnered Ashley Williams at centre-back.

But it was an afternoon to forget for the Manchester United academy product, 25, as he delivered a dreadful display in the live televised clash.

Cenk Tosun had put the visitors in front on 20 minutes with his first Everton goal, heading past Burnley keeper Nick Pope from Seamus Coleman’s neat flick.

A dreadful second half from Everton was summed up on 80 minutes when substitute Chris Wood took advantage of woeful defending to head in the winner from Johann Berg Gudmundsson’s corner.

A section of the Everton support were thunderous in their criticism of Keane, claiming he is “robbing a living” and must “go before next week”.

Williams and Keane robbing a living. Run ragged by a championship striker all game #EFC

Ashley Williams shouldn’t play for Everton again. And Keane looks shot. Why has Holgate been dropped? Why was Williams captain ahead of Coleman? Why are there new questions every week? #EFC

This season just goes from bad to worse. We’re an awful side. Other teams must be jumping for joy when they’ve got us next. Williams and Keane are shocking defenders. The sooner they and Allardyce are gone the better. #efc

All need to go before next week#EFC #everton

Fat Sam out now and take Williams, Martina, Keane, Schneiderlin with you #EFC

Michael Keane looks bewildered in every game I’ve seen him in. #EFC

Seeing ex Burnley Skipper Michael Keane play upfront against his former club as his new side search for a equaliser, is the low point of my time as an Everton supporter #EFC

In other Everton news, fans have reacted with delight after the club agreed the terms of a deal with an attacking player ahead of summer transfer window.