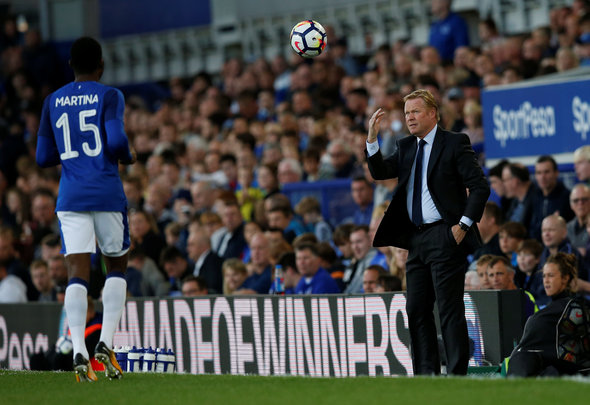 Everton have on Twitter have urged manager Ronald Koeman to axe senior pair Cuco Martina and Ashley Williams in the Europa League on Thursday evening.

The Toffees begin the group stages of the competition with a trip to Italian side Atalanta, who finished fourth in Serie A last season.

The Merseyside club will be looking to go deep into the Europa League, but will need to finish in the top two of a group consisting of Atalanta, Lyon and Cypriot side Apollon Limassol.

Koeman may have a selection headache ahead of the European clash as his team were brushed aside comfortably 3-0 by Tottenham on Saturday at Goodison Park.

They will also be wary of their Premier League match against Manchester United on Sunday, where they will expect a difficult match against the early pacesetters.

Everton fans on social media have demanded that defenders Martina and Williams are both dropped against Atalanta, with the pair both starting in the loss to Spurs.

Same team tonight as against Spurs but Kenny for Martina, Jagielka for Williams and Davies for Gana (rest for Sunday) for my money. #EFC

Which is why he's on the naughty step in my house 😠

Hoping for a bit of pace tonight, no williams or martina and less central midfielders. 👍

Martina was bought by Koeman in the summer and he has endured a difficult start to his career at Goodison Park.

The 27-year-old right-back has got a big opportunity due to Seamus Coleman’s absence through injury, but has already come under major criticism from fans.

He has already made five appearances this season across all competitions, but youngster Mason Holgate or Jonjoe Kenny could be viable replacements.

Meanwhile, Wales international Williams has also come under-fire for his recent display and the centre-back appears to be on the decline.

The 33-year-old is an ever-present in the stating XI alongside, but Phil Jagielka could be a replacement if Koeman decides to change his team.

In other Everton news, a Sky Sports pundit has predicted the outcome of the clash against Atalanta.