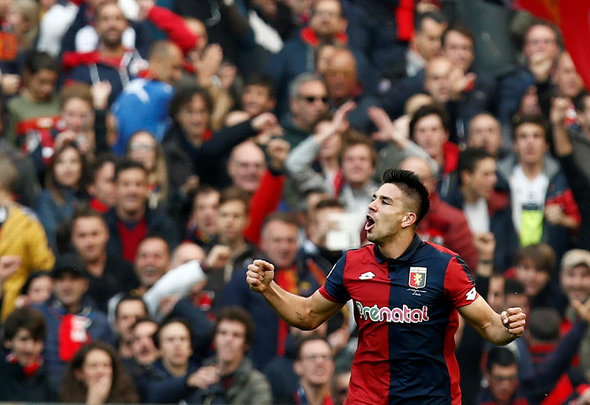 Everton are interested in Genoa forward Giovanni Simeone as a potential replacement for Romelu Lukaku, according to a report.

Italian outlet TuttoMercato claim that the Toffees are already considering alternative options for next season if Lukaku leaves Goodison Park.

It is understood that Everton are eyeing a move for Genoa’s 21-year-old hotshot, who has been in prolific form in front of goal this season.

The report details that the Merseyside club could move for the young forward, who is the son of Atletico Madrid manager Diego Simeone.

Lukaku’s future has come under question with the Toffees recently, which has caused the club to start searching for potential replacements.

Everton manager Ronald Koeman urged the 23-year -old to “respect” his contract after he revealed on Tuesday he would not sign a new deal.

Simeone has been an important member for Serie A club Genoa this season and has been the frontline attacker at the age of 21.

The Argentinian forward has made 27 appearances this season across all competitions and scored 11 goals in return, while also contributing with two assists.

First and foremost, Everton need to try and ensure they keep hold of their talisman Lukaku. They have ambitions of breaking in to the top six of the Premier League and will need the Belgian over the next few years if they are to do so. He has already scored 20 goals across all competitions and is the standout player for the Toffees, so it’s imperative Koeman keeps hold of him. Simeone is an interesting target and certainly a player the club’s supporters would be excited about seeing. The striker is already performing strongly in Italy’s top-flight and has the potential to become a consistent scorer in European. The 21-year-old could be a good young option as Koeman attempts to bolster his squad, but is not yet strong enough to fill the boots of Lukaku.