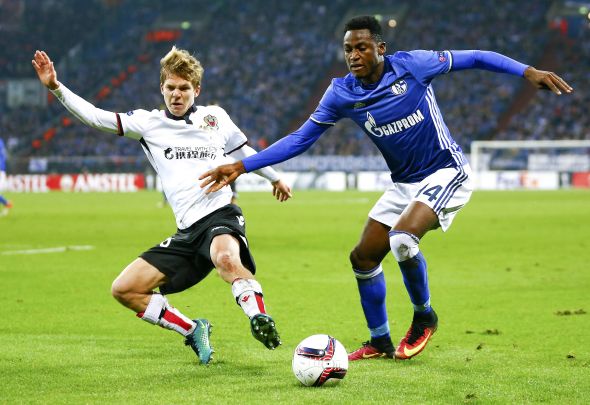 Everton have contacted Chelsea about the availability of left-back Baba Rahman, according to a report.

The Daily Mail claims, however, that the 22-year-old is close to re-joining Schalke on loan and Everton’s contact is a last ditch attempt to stake their claim.

It is understood that Italian giants AC Milan have also reached out to Chelsea in order to sign the defender.

Rahman joined the Everton’s Premeir League rivals in 2015 for a fee of £17million from Augsburg.

He struggled to impress both Jose Mourinho and Antonio Conte at Stamford Bridge and has only made 23 appearances in all competitions for the London club.

He was sent on loan to Schalke last summer but his stay was cut short as he suffered an anterior cruciate ligament injury in his left knee while playing at the African Cup of Nations.

The 26-times Ghanaian international is expected to return to action in August and the Mail claims that he is close to taking care of unfinished business he has at Schalke.

Chelsea still think he has a future at Stamford Bridge but not at present, and the Bundesliga is seen as a good developing ground for him.

The Mirror claimed that Newcastle were also interested in his signature.

Everton are looking for full-back options following the long-term injury suffered by Seamus Coleman as he broke his leg playing for the Republic of Ireland earlier this year.

Leighton Baines is Ronald Koeman’s current left-back choice but at the age of 32, it looks like the Dutchman is seeking a younger replacement to the former Wigan man.

Rahman is a good player, but is not quite at the level that Chelsea need him to be. Marcos Alonso has been a decent signing by Antonio Conte and he also has Cesar Azpilicueta who can play at left-back if needed. There doesn’t seem to be a future at Stamford Bridge for Rahman and it’ll be a good signing by Koeman if he can beat Schalke to the punch. It remains to be see how the Ghanaian returns from injury though, because it could have serious impeded his progression towards his potential ability. AC Milan are a big threat to Everton though, because not many players can resist a move to the San Siro.

In other Everton news, Peter Reid has launched a scathing attack on this Goodison ace.