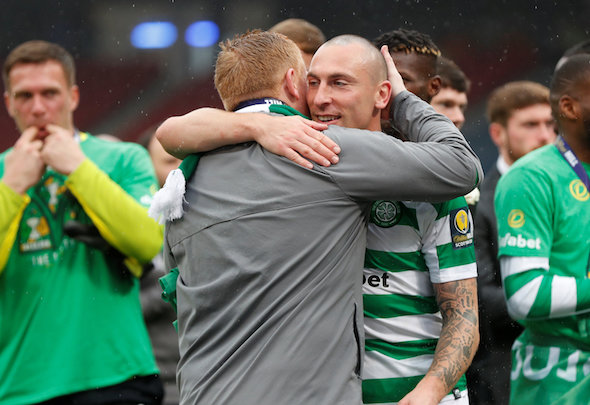 Alan Hutton admits he is baffled by the chopping and changing from Celtic manager Neil Lennon ahead of the Hoops’ clash against Lazio on Thursday.

The former Scotland international, speaking exclusively to Football Insider assistant editor Russell Edge, says that he struggles to understand why the Bhoys’ boss is constantly tinkering with his side game by game, especially when it comes to dropping players who have performed well.

The Hoops bounced back from a disappointing 2-0 defeat to Livingston with a comprehensive 6-0 thrashing of Ross County on Saturday, with Lazio visiting Parkhead on Thursday evening.

While Hutton is not expecting too many changes for the game against the Italians, he admits he struggles to wrap his head around the manager’s recent team decisions.

Hutton told Football Insider: “It’s always kind of strange, sometimes he takes (players out). For instance Frimpong played really well but in other games he puts Bauer in, perhaps for his experience.

“He might change the odd position but he does tend to stay with what he knows. It’s going to be a tough game for them but they’re obviously at home.

“They obviously lift their performances for these European nights and I expect it to be a good game.”

Lennon made two changes to his side between the Livingston and Ross County games, Tom Rogic coming in for the suspended Ryan Christie and Jeremie Frimpong taking Moritz Bauer’s place on the right-hand side of the defence.

Celtic have picked up a draw and a win from their opening two Europa League ties against Rennes and Cluj respectively.

In other Celtic news, Hutton has suggested a Premier League side are plotting to sign a Hoops star who is always an “8 out of 10”.