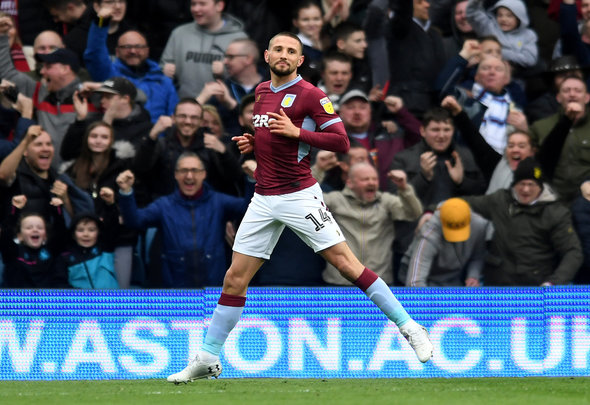 Darren Bent claims that Aston Villa midfielder Conor Hourihane could keep new signing Douglas Luiz out the starting XI at the start of the season.

Speaking exclusively to Football Insider, the former Villa ace says that the Republic of Ireland’s “brilliant” end to last season, which helped the Villans secure a return to the Premier League via the play-offs, means he should be kicking off the new campaign among the starting XI.

Bent says that while no one but Jack Grealish can consider themselves a guaranteed starter for next season, Hourihane should be starting ahead of his new Brazilian teammate.

Asked if Hourihane might come under threat, Bent told Football Insider: “Nah, not for me. Conor Hourihane was brilliant at the end of last season, scored a great goal in the play-off semi-final.

“I believe he’ll probably start the season, I think he’s a bit more battle-tested. I don’t think it’s the end for Conor Hourihane because he was good last season. I just feel now there’s competition for places.

“No one can sit on their laurels or coast through. There’s probably one player right now that’s probably assured of playing that first game of the season and that’s Jack Grealish. Places are up for grabs.”

Hourihane was a mainstay for the Villans last season, playing 43 times during the regular campaign and featuring in all of their play-off games, scoring eight goals and notching up 12 assists.

In other Aston Villa news, it can be REVEALED that the club are battling Derby County for a highly-rated English midfielder.