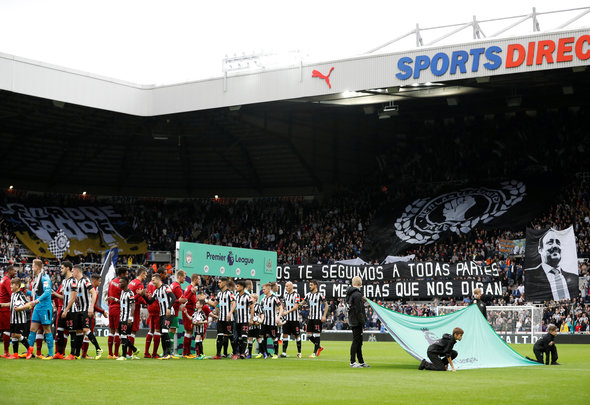 The former Sunderland and England hitman, speaking exclusively to Football Insider assistant editor Russell Edge, says he knows exactly what new owners would mean to the Toon Army after living in the north east.

Reports of a potential buyout have emerged over the past week, The Telegraph reporting that the Premier League have been made aware of a bid led by the Public Investment Fund of Saudi Arabia.

Other sources include The Athletic’s George Caulkin stating Ashley’s reign “has never been closer to ending,” while the Daily Mail report that the proposed investors are “hopeful” of a deal being done.

Bent says he is desperate to see the Magpies given something to cheer about after a tumultuous time under their current owner.

Bent told Football Insider: “This has been going on for a Newcastle and they just want it over the line now, they absolutely love it to happen.

“I hope it happens for them because them Geordies have been through a lot. Their emotions have been toyed with – they think they’re going to get the takeover, it doesn’t happen, it becomes difficult.

“It’s such a tough one, a tough place to be in. If it is true and there is a takeover, it would be nice to see Bruce given a little bit of money to spend and be able to go out in the transfer market.

“I’ve lived up there and I know how much football means to them in that particular part of the world. I hope Mike Ashley does the right thing.”

Ashley has been at the helm on Tyneside since his takeover back in 2007.

The Toon Army have endured two allegations under his stewardship, as well as a number of controversial decisions.

In other Newcastle United news, Bruce has been tipped to sign an England international and build his side around him this summer.