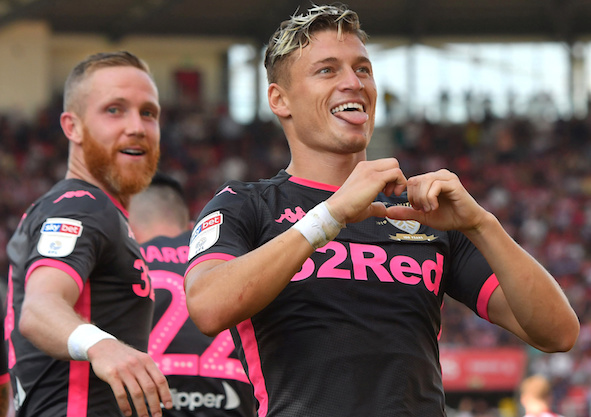 Danny Mills claims that the constant questionable defensive positioning of Leeds United wing-back Ezgjan Alioski is “bizarrely” better for his fellow defenders than it happening every so often.

Speaking exclusively to Football Insider assistant editor Russell Edge, the former Leeds and England defender says that the Macedonian international has proven his lack of defensive awareness on a regular basis but says that helps the likes of Ben White be prepared to cover for him.

Alioski has been moved into a defensive role during Marcelo Bielsa’s time at Elland Road, having originally played as a winger following his arrival from FC Lugano back in 2017.

Mills says that the 27-year-old’s attacking nature means he is very often caught out of position but that the regularity at which it happens means those around him are already prepared.

Mills told Football Insider: “He doesn’t make it easy, he’s roving, isn’t he? It’s not his natural position, he’s come into that position originally out of necessity but he’s done well.

“It does cause position problems from time to time. You learn to deal with it, the one thing that you do know is that it’s consistent. You do know that he’s not going to be in the right position so you can plan for that.

“Bizarrely, that’s better than it happening every now and then when you expect him to be somewhere and he’s not. At least with Alioski you can go: ‘Well I know he’s not going to be there and I can have a contingency up my sleeve for that.'”

Alioski has been battling it out with natural left-back Barry Douglas for a place in the starting XI this season, the Macedonia star playing 14 times across all competitions for the Whites.

He has a total of 106 appearances under his belt for the Yorkshire heavyweights, scoring 16 goals and contributing 12 assists.

In other Leeds United news, Noel Whelan has boldly claimed one Elland Road ace could become one of the best players in the Premier League.