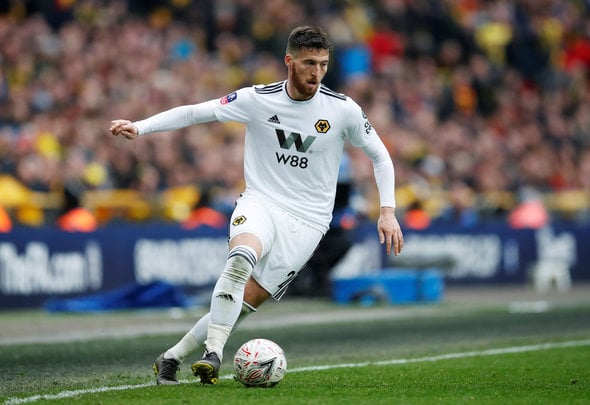 Speaking exclusively to Football Insider, the former Aston Villa and England striker says that while Diogo Jota and Raul Jimenez were stealing the headlines, he was quietly impressed with the full-backs displays.

Wolves made a supremely successful return to the Premier League after their promotion from the Championship, finishing seventh under Nuno Espirito Santo and earning a place in the Europa League qualifiers.

Bent chose to laud over someone away from the Portuguese contingent at Molineux, singling out Republic of Ireland international Doherty for his performances on the right-hand side of the defence.

Bent told Football Insider: “I’m going to pick someone who’s under-the-radar a little bit, because everyone is talking about Jimenez, everyone talks about Jota and Ruben Neves, but I like Matt Doherty.

“For a full-back, he is brilliant. He is what you call a modern-day full-back. He gets forward, got good feet, good technique and what I like about him as well is that he’s not thrown in the towel.

“He was there a few years back when Wolves were awful, he was always playing well and he helped them come through the ranks like Conor Coady and they managed to hold their places down. He’s key to the way they play and for me he’s been brilliant for the last couple of seasons.”

The 27-year-old played every Premier League game for Wolves last season, scoring four goals and chipping in with a further seven assists, while he also scored four and assisted three on the way to the FA Cup semi-finals.

In other Wolves news, it can be REVEALED that the club are plotting to sig another Portuguese sensation likened to Paul Pogba.