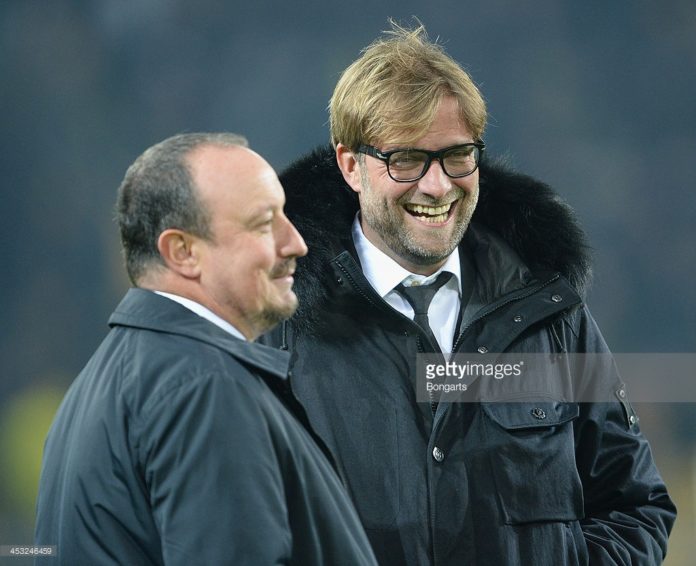 The Merseysiders’ American owners are considering a new boss despite appearing to have convinced Rodgers that he will remain in charge next season.
As revealed by Football Insider, Liverpool have already had a meeting with Jurgen Klopp, who is their first choice to replace the northern Irishman if they decide to sack him. They have also made an approach for Rafael Benitez and are considering a third un-named manager.
Rodgers’ position is under growing threat after an appalling finish to Liverpool’s season ended with Sunday’s humiliating 6-1 Premier League defeat to Stoke.
The manager was barracked by the travelling fans as he left the field at half-time, with Liverpool 5-0 down, and he said that the anger directed towards him was justified. Rodgers’ team finished in sixth place, after winning only two Premier League matches since the middle of March – against Newcastle United and QPR at home.
The consequences for Rodgers could be severe. Asked directly if he accepted there would be questions about his future, Rodgers said: “Absolutely I have always said if the owners want me to go, I go it is as simple as that. But I still feel I have a lot to offer here.”
This came after Rodgers claimed on Friday that he is “150% sure” he will be the club’s manager for a fourth consecutive campaign as he prepares for an end-of -season review with Fenway Sports Group over the coming days that would appear to be an increasingly uncomfortable prospect.
Rodgers is set to fly out to Boston, where he will be grilled by club chiefs as part of a thorough assessment of all areas of the club, including the first-team squad, the coaching staff and the much-debated transfer committee.
FSG will assess Rodgers’ performance  and could even take the step of sacking the Northern Irishman after three years at the helm.

The Merseysiders are considering Klopp and Benitez but they face strong competition for their former manager from Real Madrid, who have held talks with him amid the growing likelihood that Carlo Ancelotti will be sacked at the end of the season.
It is understood that discussions between Benitez and Real are at an advanced stage and that Liverpool only recently contacted the Spaniard through third parties to assess his availability.
West Ham made Benitez an offer to return to the Premier League but the Napoli manager rejected the opportunity to replace Sam Allardyce, who has not had his contract renewed at Upton Park.
Real, who are also likely to consider Klopp for the Bernabeu hotseat, have ended the season trophyless after losing out to Barcelona in the La Liga title race and being knocked out of the Champions League at the semi-final stage.
Ancelotti, who is a target of Manchester City and AC Milan, is set to be dismissed by Real and Benitez is emerging as president Florentino Perez’s favourite to replace the Italian.
Liverpool know they have to act fast as they consider alternative managerial candidates to Rodgers.
Klopp already has an offer on the table from Wolfsburg and is also on the radar of Bayern Munich and Man City.
Football Insider revealed earlier this month that Liverpool had made an approach for the 47-year-old German, who has announced he will leave Borussia Dortmund at the end of the season.