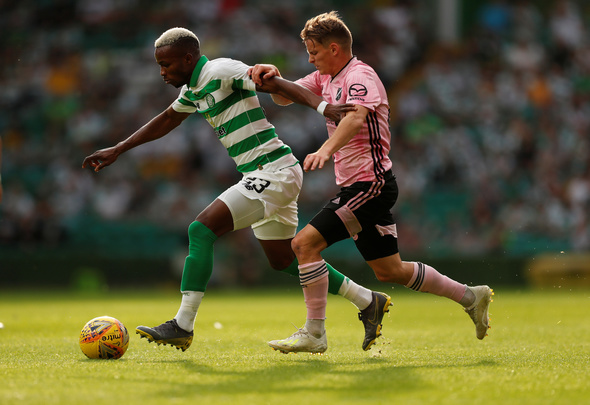 Jackie McNamara claims that new Celtic signing Boli Bolingoli-Mbombo is playing “catch up” to the rest of the Hoops’ squad after picking up two injuries in three games.

The former Parkhead and Scotland star, speaking exclusively to Football Insider, says that the injury problems suffered by the 24-year-old are a little worry as it suggests he is struggling with his fitness levels.

The left-back, signed from Rapid Vienna this summer, was forced off in the first-half against Nomme Kalju on Wednesday night, having also been substituted against FK Sarajevo in the first qualifying round for the Champions League.

McNamara says that none of the Celtic squad will be at full fitness, suggesting that it could take eight league games – which takes the Hoops into October – before everyone is performing at their best.

“He’ll be trying to get up to speed with his teammates,” McNamara told Football Insider.

“It’s not a big concern but two in three games coming off, as long as it’s nothing serious. I don’t know how much game time he got before he came to Celtic. They’ve had a full pre-season and he is playing catch up.

“Even though the Celtic players have been back for a good few weeks now, they’re still not 100 per cent. Until the league starts and they’ve got eight games behind them, that’s probably when they’re at their fittest.”

Bolingoli played 73 times for Rapid Vienna before his move to Parkhead and has been Neil Lennon’s first-choice left-back in the absence of Kieran Tierney, the Scottish international missing through injury.