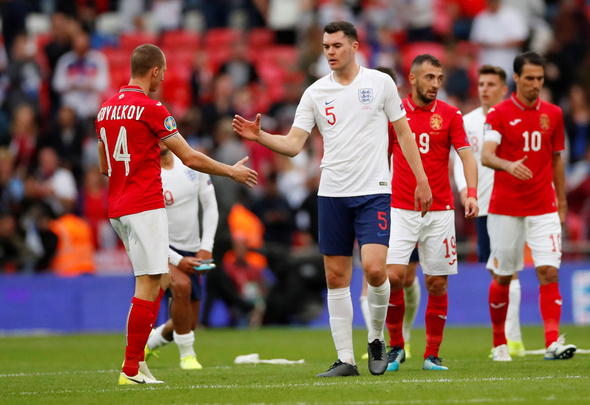 Danny Mills has suggested that a lack of alternative options is why Everton defender Michael Keane is set to keep his place in the England side despite his “poor” display against the Czech Republic.

Speaking exclusively to Football Insider assistant editor Russell Edge, the former Leeds and England full-back says that the Three Lions are lacking in quality options at the heart of the defence, with Harry Maguire joining Keane in Friday’s 2-1 defeat.

Manager Gareth Southgate had five natural centre-backs at his disposal but only Keane, Maguire and Liverpool’s Joe Gomez have any experience at international level, Chelsea’s Fikayo Tomori and Aston Villa’s Tyrone Mings waiting for their first caps.

Mills highlighted how England have gone from having numerous top-class defenders to lacking in quality options and that Keane’s experience means he is pushed up the pecking order.

Asked whether Keane was lucky to keep his place for England, Mills told Football Insider: “The problem is at this level, Tyrone Mings is still a novice, you have no idea how he’s going to perform. John Stones isn’t really playing at Manchester City.

“Michael Keane is playing week in, week out. Okay, Everton are shipping goals from set-pieces and that happened last night – it wasn’t just Michael Keane but it was poor defending. There is a little bit of dearth of quality centre backs at the moment.

“Several years ago that was England’s forte, we were incredibly strong in that area, some outstanding, world-class defenders. The centre back pairing is a work in progress, there aren’t too many better out there to coach that than Gareth Southgate.”

Keane has played nine times for England since making his debut back in 2017, with his one and only goal coming against Montenegro.

He has been a mainstay for Marco Silva at Everton this season, featuring in every single minute of the club’s Premier League campaign so far.

In other Everton news, Darren Bent has revealed how long he believes Marco Silva has to save his job at Goodison Park.