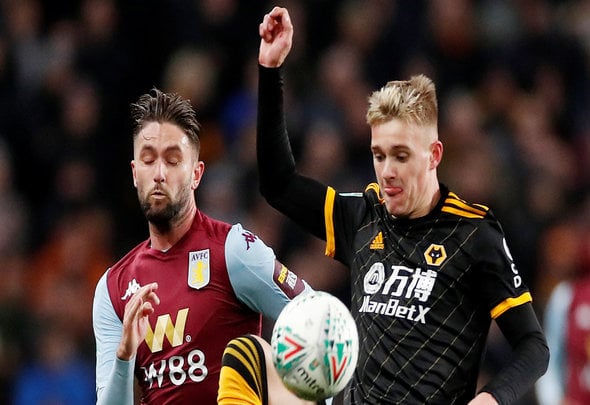 Paul Robinson has been left raving over the performance of Aston Villa midfielder Henri Lansbury against Wolves and suggests he will be thinking he deserves more game time under Dean Smith.

Speaking exclusively to Football Insider assistant editor Russell Edge, the former Tottenham and England goalkeeper says that the 29-year-old was the stand out performer for the Villans in their 2-1, pulling the strings and controlling the game from the middle of the park.

Lansbury was handed just his fourth appearance of the season on Wednesday night and repaid his manager’s faith with both assists in the club’s 2-1 win over their Midlands rivals.

Robinson says that the quality of the former Nottingham Forest star stood out at Villa Park and that he will likely be thinking he deserves more game time than he has been getting this season.

Robinson told Football Insider: “I thought (Henri) Lansbury was the outstanding performer last night. I thought he pulled the strings, I thought he came in and did excellently well.

“If you’re not in the squads, you have to reevaluate your career path if you like depending on what you want as a player. If you’re not getting minutes on the pitch or in the squad it’s very disappointing and disheartening, especially when you put in a performance like he did last night.

“Lansbury, playing like he did last night, he will probably be thinking: ‘I should be at least in and around the squad.'”

Lansbury has only started two games all season for Aston Villa, both of which came in their League Cup campaign.

His other two appearances have come off the substitutes’ bench in the Premier League but total just seven minutes of game time, finding himself an unused sub for six other top-flight fixtures.

In other Aston Villa news, Robinson has been gushing over a Villa star who “eyebrows were raised over”.