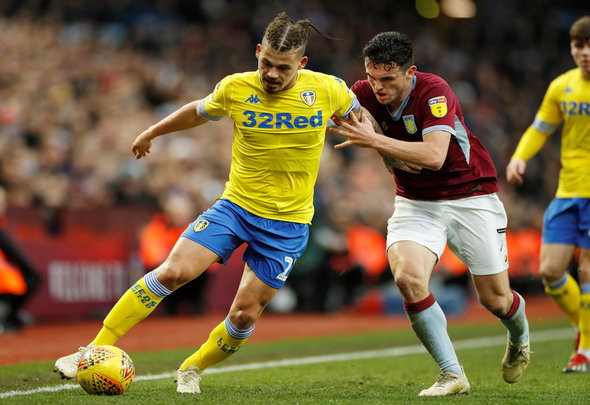 Noel Whelan says that he expects Aston Villa to return with a late bid for Kalvin Phillips after seeing another offer turned down by Leeds United.

Speaking exclusively to Football Insider, the former Leeds man says that the Villans have shown their spending power this summer and that he expects them to continue splashing the cash until the final days of the window.

As revealed exclusively by Football Insider, Aston Villa have seen a £15million bid rejected for Leeds’ 23-year-old midfielder after tracking him all summer, with the Whites determined to hold onto him for next season.

However, Whelan says that there is obviously some optimism at Villa Park that they could still do a deal for Phillips and admits he is expecting another offer before the transfer window slams shut.

Whelan told Football Insider: “It doesn’t seem like clubs are giving up hope, it’s not like they’re being told he’s definitely not for sale, they keep coming back and having another go.

“I wouldn’t put it past them (Villa) the way they’ve gone and spent this summer. They’ve got a fantastic set of players there and they’ve just added to that as well. I can’t see them going down, I think they’ll be fine.

“Villa don’t seem scared to go out and splash the cash. Very wealthy owners, just been promoted, the majority of the money earned for getting into the Premier League, they’ve spent so it wouldn’t surprise me if late bids did come in for the player.”

Phillips was a mainstay for Leeds last season, playing 46 times in all competitions, with a total of 128 Championship appearances under his belt.

He has two years left on his current contract at Elland Road, having come through the youth system in Yorkshire.

In other Aston Villa news, Whelan says the club could not have got a better player as he drools over one of their new recruits.