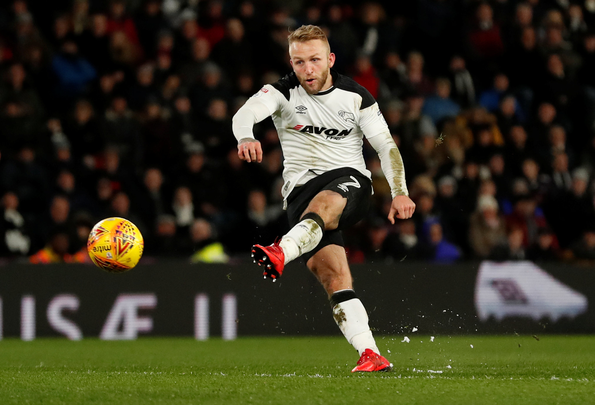 Scotland striker Johnny Russell has revealed that he almost joined Celtic in 2013.

The 27-year-old, who currently plays for Sporting Kansas City, disclosed that the Hoops didn’t match Derby’s bid for the player when he left Dundee United in 2013.

Russell, a childhood Hoops fans, disclosed that it would have been a dream to move to the Scottish champions but it never happened and he moved to Derby instead.

“Derby made the bid and made it really clear they wanted me to join. They made me feel extremely wanted, to be part of the club” Russell told SportingKC.com.

“Celtic were informed and they wouldn’t match the offer, so it was one of those that was close but it never came down to me making a decision on where I was going.

“Obviously, if the bid was matched, it would have been an extremely difficult decision for me.

“I always wanted to go somewhere else but if your boyhood heroes come in for you, there are not many people who would turn it down.”

Russell, who has four caps for Scotland, was constantly linked with a move to the Hoops during his time at both Dundee United and Derby, but the move never materialised, and it seems unlikely that the player will ever move to the Scottish champions.

It seems that Russell is going to be one of those players who has always linked with the Hoops but never makes the move. While he was at Dundee United, a move to the Hoops would have made sense, but now that he is playing in the United States, it is hard to judge the level of football he will be playing at. He has been a good striker in his career, but perhaps not at the level the Hoops are looking for now, especially when they are looking to take the next step in Europe. He has had a good career so far, and he could perhaps do well in the Championship once again, but as for a move to the Bhoys, those days seem long gone.

In other Celtic news, three attackers could be leaving the Hoops in the summer