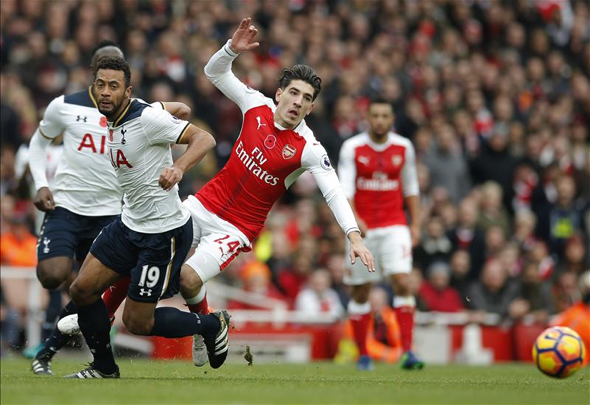 Arsenal fans have reacted with dismay on Twitter to news that Hector Bellerin has reportedly been ruled out of action for the rest of the month, after damaging an ankle ligament during the north London derby.

The International Business Times claims sources have revealed that medical tests have confirmed the worst ahead of a crucial run of fixtures for the Gunners.

After the international break Arsenal head to Old Trafford to play Manchester United before a crunch Champions League game with Paris Saint-Germain that could determine who wins the group.

The IB Times report claims that Bellerin has been carrying the knock since the last international break, when Bellerin limped out of a game for Spain Under-21s.

He was rested for the last Champions League game with Ludogorets after manager Arsene Wenger claimed he had suffered an incident in training, but he played 90 minutes against Tottenham subsequently.

It appears that Bellerin made the problem worse in that game though and now faces a few weeks on the sidelines, and Arsenal’s fans – still waiting for news on an injury to Alexis Sanchez – aren’t happy.

Bellerin and Sanchez injured, Man Utd away, followed by PSG at home 👌👌

This Bellerin injury dey worry me. Jenko was terrible in his last game.

Injury gods!!!! where and when did we fail to appease you?

Said this earlier. Our challenge every season is not the opposition but our injury list. Bellerin, Alexis, Santi out is a huge loss. https://t.co/iUSvZUNaKk

So Alexis has a hamstring problem and Bellerin is out until December apparently
FFS WHEN WILL THIS INJURY NIGHTMARE END????

In other Arsenal news, Alexis Sanchez has said the two words that fans wanted to hear.