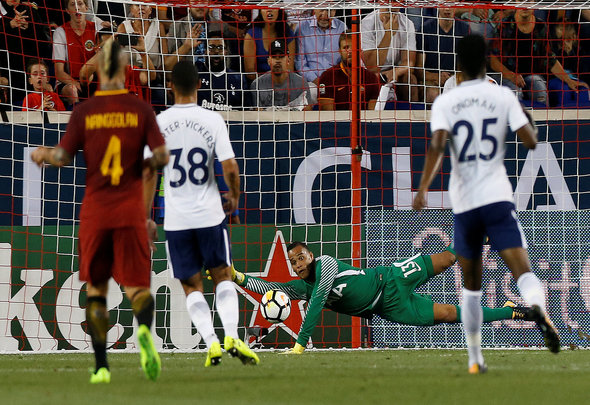 Tottenham boss Mauricio Pochettino has said that goalkeeper Michel Vorm was vital to the club’s League Cup victory over Barnsley on Tuesday.

Dele Alli’s goal from Kieran Trippier’s cross was the difference between the two sides as Spurs secured a 1-0 victory at Wembley, which sees the Lilywhites progress into the fourth round.

However, despite Alli’s goal scoring heroics, it was the man at the other end of the pitch who Pochettino chose to praise after the game.

Speaking to Spurs TV, available on the club’s official Twitter account, the Argentinian boss said: “I think we need to congratulate Michel Vorm.

“Vorm was fantastic in the third action of the second half.

“The save was fantastic. He is a top, top keeper.”

🗣️ Mauricio is taking plenty of positives from tonight's victory in the @Carabao_Cup at Wembley. #COYS pic.twitter.com/bRJ5vYWOKT

The 33-year-old was called into action only a few times throughout the night, but was alert enough to pull off an impressive save to deny Barnsley’s Ike Ugbo, on loan from Tottenham’s rivals Chelsea, when the 18-year-old broke through one-on-one.

The Dutch stopper also demonstrated that despite his lack of playing time, with his last competitive outing coming back in April, he still possesses the sharpness of a first choice goalkeeper, as he showed a tendency to rush off his line to smother the ball and put a firm stop to any Barnsley attacks.

However, he will likely be back in his understudy role to club captain Hugo Lloris come Saturday, when Spurs travel across the capital to take on fellow London side West Ham at the London Stadium.

In other Tottenham news, fans did not hold back when voicing their opinions on this midfielder’s performance against the Tykes.