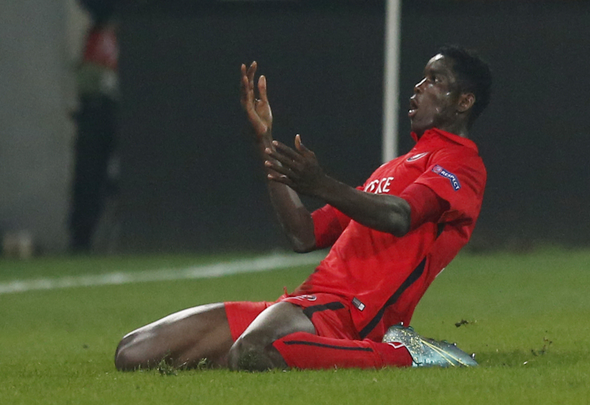 Celtic manager Brendan Rodgers may have to welcome one or two new centre-forwards to Parkhead in the summer transfer window with Odsonne Edouard’s loan deal coming to an end and speculation rife about Moussa Dembele.

The Daily Mail has reported that the Bhoys can trigger a £7million option to buy clause in Edouard’s loan deal in Glasgow, however Rodgers must forget about doing that because there are definitely better options out there for him, who may even cost a smaller amount.

One forward that Celtic absolutely must go out and sign is Midtjylland’s Paul Onuachu, who has been in devastating form this season for the Danish title chasers.

Onuachu, 23, is getting better and better every season and his 6ft 6in frame is something that Rodgers could do with to spearhead his attack with the amount of wide talent in his side who are able to cross the ball into the box.

The Nigerian, who is knocking on the door of the national team ahead of the World Cup in Russia, would not be worried about coming up against some of the Scottish Premiership’s rougher defences and could become a real key player.

The goal machine has been in stunning form this term and scored 16 goals in 25 appearances across all competitions as Midtjylland chase the Danish top-flight title.

In 2016, Onuachu also proved he can score against the best as he scored a winning goal against Manchester United in the Europa League knock-out rounds.

Onuachu could very much be Celtic’s next Dembele if Rodgers can strike up a deal for him this month and he should more than be able to replicate his form in Scotland with better players around him.

In other Celtic news, the Hoops have made an offer for this international centre-forward to become the best-paid player in Scottish football.

Exclusive: Keith Hackett ‘Amazed’ at Man United footage as ‘Rabbit pulled out of the hat’