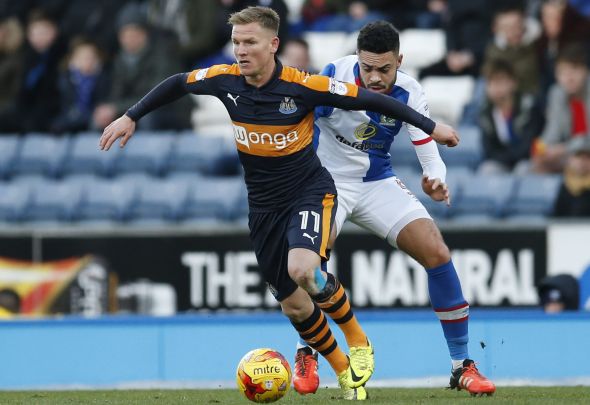 Newcastle’s rise to the top of the English Championship has not come without a hero or two.

The Magpies established a crucial one-point lead over promotion rivals Brighton with a comfortable win over Rotherham on Saturday, and the likes of Jonjo Shelvey and Dwight Gayle have been integral to their success.

However, while the praise for both Shelvey and Gayle has been well-founded, there is one other that perhaps does not quite get the recognition he deserves – Matt Ritchie.

The 27-year-old moved to St. James’ Park from Premier League side Bournemouth in the summer for a fee of £10million – a deal that came as a surprise considering the Magpies’ demotion from the top-tier.

However, the Scotland international has been a revelation since arriving in the north east. From 30 appearances in all competitions, he has contributed 10 goals and eight assists, putting in a series of magical displays since the new year, where he has netted four goals in his last two games.

Ritchie is an exciting winger, with pace, an eye for goal, and an unquestionable ability. He has stepped up to the plate at a time when Newcastle were without the likes of Christian Atsu, Mo Diame, Dwight Gayle, Jonjo Shelvey and Aleksandar Mitrovic through injuries, suspension and international commitments, and when results weren’t going their way.

The wing wizard has certainly won over the Newcastle fans in his first six months at the club, and in his current form it comes as little surprise.

Full of charisma, they have a player hungry for success, and he will stop at nothing to ensure Newcastle are challenging in the top-flight again.

He did the same at Bournemouth, helping them rise up through the English football pyramid from League One to the Premier League in the space of just two years, and he looks set to maintain that winning mentality in the second-half of the campaign.

Rafa Benitez has been forced to pursue a new winger in the transfer window, and there is big talk of Andros Townsend making a spectacular return to the club he left just six months’ ago.

He and Ritchie on the wings for Newcastle would be a formidable attacking force, and one that will surely send Newcastle back among the elite.

In other Newcastle news, Magpies midfield ace Isaac Hayden has revealed the moment his Arsenal career was over.