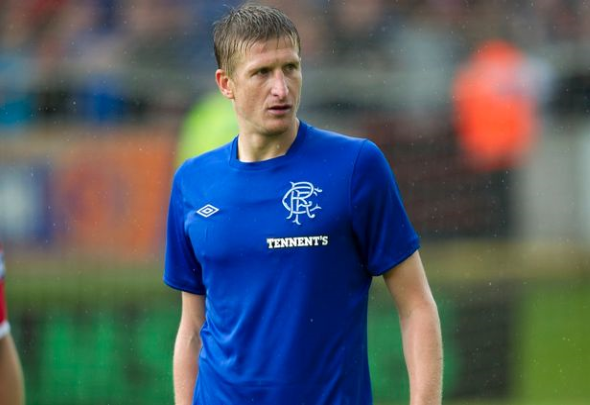 Former Rangers defender Dorin Goian has revealed he “didn’t think it was possible” to train the way his Ibrox team-mates did after drinking so much as they did.

Goian joined the Gers in 2011 before leaving on loan shortly after the Light Blues were thrown into the Third Division after their 2012 financial meltdown.

After joining the Gers, Goian quickly became a big favourite with the Light Blues fans after his physical displays.

The Romanian told how he was part of a group of players who would go out to get “very drunk” before training at “200%” the following day.

“After games and in some evenings, I was part of a group of five or six married players and we all went out with our wives,” Goian said, as quoted by the Scottish Sun.

“We were supposed to all go out for a meal, but there was only one aim…to get very drunk.

“It’s not like you start drinking a spirit and then stopped, you had to get drunk!

“I sat at the table drinking shot after shot, then a bottle of white wine.

“The next day in training, these same players who were on the night out were giving it 200 per cent in training.

“I didn’t think it was possible to train as well as that after a night of madness.”

The defender made 42 appearances for the Light Blues before heading to Italy to sign for Spezia on loan then signing for Asteras Tripoli on a permanent deal.

Goian was part of the side who finished second in the Scottish Premiership in 2011/12 before making a handful of appearances in the Third Division.

With previous Rangers teams having abided by the idea that the ‘team that drinks together wins together’ it isn’t a shock to hear stories of a drinking culture at Ibrox under Ally McCoist. The way that season ended, and the general basketcase the Ibrox giants were, probably made it an easy way to ignore the shambles the club were becoming with Craig Whyte at the helm. Six years on, the Light Blues are finally looking like they are getting back to where they want to be.