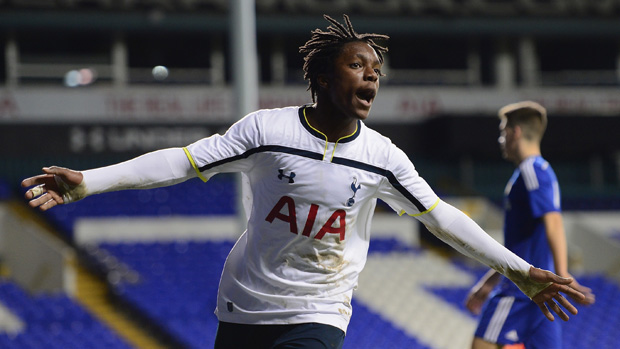 Tottenham’s academy sensation Kazaiah Sterling starred for the Under-18s on Tuesday night – and the club’s supporters were thrilled with his performance on Twitter.

Spurs’ Under-18s suffered a narrow 2-1 defeat against Chelsea in the first leg of the FA Youth Cup semi-final.

Chelsea’s rising stars took a two-goal lead before half-time thanks to headed goals from Reece James and Ike Ugbo.

However, the north London club restored life in the tie ahead of the second leg as forward Sterling confidently dispatched his chance in the 88th minute.

Spurs fans were impressed with the display of the 18-year-old and believe he can have a big future.

Much better performance in 2nd half. Roles impressed when he came on. Sterling deserved his goal. Bring on return leg #COYS

Sterling looks like a right athlete doesn't he?! #COYS

Spurs’ first-team manager Mauricio Pochettino has already revealed that Sterling will train with the senior squad next season and he is now being closely watched by fans.

The forward is highly rated at White Hart Lane and will hope to follow in the footsteps of Harry Kane, who made the step up from the academy to first-team.

Spurs do have a number of exciting young talents in their ranks, including winger Marcus Edwards.

The north London club are keen to promote youngster to their senior squad and central midfielder Harry Winks has been able to make the step up this season.

He is now vying for a starting spot alongside Mousa Dembele and Victor Wanyama, showing Pochettino’s desire to invest in youth.

In other Tottenham news, the club’s supporters reacted on Twitter after Harry Kane provided an injury update.