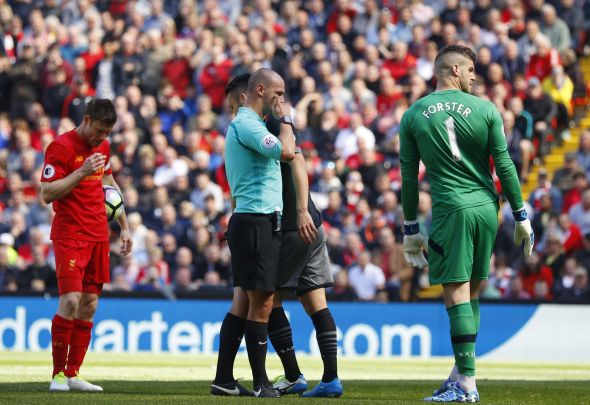 Dermot Gallagher believes Fraser Forster was guilty of unsporting behaviour by getting involved with James Milner before the Liverpool ace took his penalty.

Forster approached Milner after referee Bobby Madley had given a penalty to the Merseyside giants on Sunday afternoon, and his mind games seemed to work as Forster saved Milner’s spot kick.

Gallagher, 59, also claimed that Madeley had missed the incident because he was handing Cedric Soares a yellow card for dissent following the decision to give Liverpool a penalty.

“I do think it is a penalty; it’s a great spot,” Gallagher said. “But it is unsporting behaviour. It raises a few issues. The headsets are there to aid, rather than represent.

“James Ward-Prowse was booked, as was Cedric. The referee identified, but lost sight of Forster with Milner. The longer it takes to take the penalty, the more pressure it puts on Milner and that’s what the referee missed.”

Madley pointed to the spot midway through the second half of Liverpool’s 0-0 draw against Southampton, after he adjudged defender Jack Stephens to have handled in the penalty area.

Immediately after the incident, goalkeeper Forster approached Milner in an attempt to put the retired England international off from taking his penalty, sharing some words with him.

Milner had previously scored seven goals from seven penalties this season, but Forster dived to his right to push the ball around the post for a corner.

Liverpool’s draw sees them remain in third but are now in danger of being caught by fourth placed Manchester City, who have a game in hand over the Reds with only a point separating the two sides.

In other Liverpool news, the Reds have suffered a transfer blow as this £20million target has received offers from a number of European sides, according to reports.