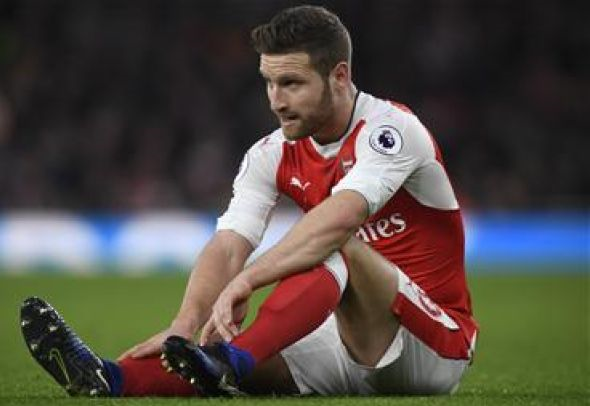 Arsenal fans have destroyed defender Shkodran Mustafi after the enforcer made a terrible mistake to gift Shane Long the opening goal for Southampton.

The Gunners were big favourites to secure all three points at the Emirates despite Arsene Wenger fielding a weakened team, but Southampton looked like delivering a shock in front of a half empty stadium.

However, Pierre-Emerick Aubameyang came up with a canny finish middway through the first half to restore parity, before Danny Welbeck made it 2-1 towards the end of the 45.

The Arsenal fans have seemingly given up on their team this season, despite them being on the verge of the Europa semi-final, but the quality of play from their side in the opening 25 minutes matched the fans’ disinterest.

However, there were enough fans to take to Twitter to criticise Mustafi after a really poor first 45 minutes.

One said he should be sent to Coventry in the summer – literally. Another said he was either good or Sunday League and no in-between. Unfortunately, today’s game is on a Sunday.

Here are the best reactions to his first-half performance:

We spent £35m on Mustafi

Cannot wait until Mustafi is no longer affiliated with Arsenal.

Mustafi to Coventry in the summer

That is actually ridiculous from Mustafi.

Mustafi really is a terrible defender…

What happened to Mustafi's stupidity?

In other Arsenal news, ‘Big fraud’, ‘Get rid’, ‘Shocker’: Arsenal fans have had it with one attacker despite win V CSKA