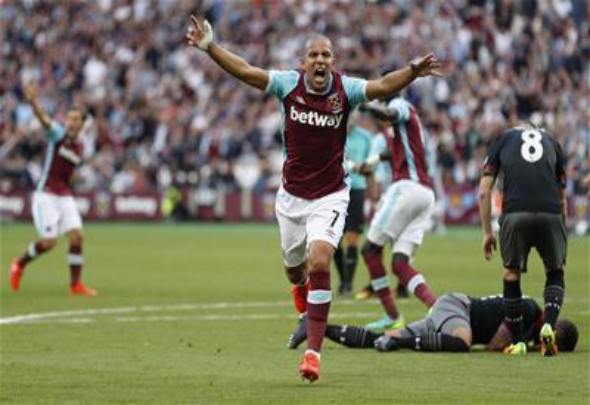 Gary Neville believes any West Ham appeal against Sofiane Feghouli’s red card will be denied by the FA.

The 27-year-old’s red card against Manchester United was the quickest of the 2016-17 campaign, as his lunge on defender Phil Jones in the 13th minute saw him receive his marching orders during the 2-0 loss to Man United.

Neville told Sky Sports’ Premier League show that he believes the Hammers will fail if they look to appeal the red card shown by referee Mike Dean on Monday evening.

“They’ll appeal it, but they won’t get away with it because the FA will say Feghouli was out of control and over the top of the ball,” Neville said.

“But it is the wrong decision. Feghouli loses control of the ball, yes, but it is not a red card. A yellow at most. Phil Jones’ reaction and the presence of the United players provoked Mike Dean.”

The red card will come as a huge blow to on-loan winger Feghouli, who has failed to impress in east London since his move from La Liga giants Valencia.

Making just his first start in the Premier League for the Hammers this season, the Algeria international was looking to make an impression against Jose Mourinho’s side as he looks to establish himself in claret and blue.

However, Feghouli is now set to miss the next three games for the Hammers, which will dent his first-team chances.

Feghouli will miss the FA Cup third round clash against Man City, before missing Premier League games against Crystal Palace and Middlesbrough.

In other West Ham news, this player gets a 3/10 in Football Insider’s player ratings.