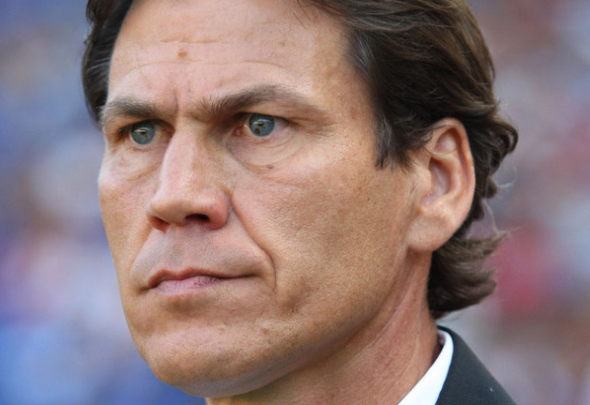 Marseille manager Rudi Garcia believes Umar Sadiq would have “much to offer” Rangers after the Gers were linked with a move for the Roma striker – and thinks a move to Scotland would help Sadiq become an international player.

The Light Blues have been linked with a loan move for the Nigerian striker and Garcia, who gave him his Serie A debut at Roma, thinks both the Gers and the player would do well from the move.

Garcia brought his current side to Ibrox last summer for a friendly and was blown away by the atmosphere – and thinks Sadiq would “benefit greatly” from joining the Light Blues.

“Now he is linked with Rangers, and I think it would be a great move for both parties,” Garcia said, as quoted by the Sunday Post.

“Umar would have much to offer them, but he would also benefit greatly because this is a club with a great tradition and a truly exceptional support. I took Marseille to Ibrox for a match last season, and I was very impressed by them. It was if they felt they were attending a Champions League tie, not a friendly game.

“Scottish football is certainly very physical, so Sadiq would need to learn how to deal with that aspect of the game. Rangers are one of the top clubs in the UK, and they are in the Europa League this season, which is a platform for all players. If Umar goes to Scotland and does well, he will have the potential to grow into an international player.”

The Light Blues need strikers added to the squad as quickly as possible with only Alfredo Morelos a recognised senior striker. Bringing Sadiq to Ibrox would give Steven Gerrard some new options and offer him something completely different to what Morelos brings to the side. The physical side of the Scottish game would certainly be something the Nigerian would need to adapt to but he has the attributes and physique to more than cope with that. A loan move to Scotland would also be the perfect opportunity for the striker to prove to Roma that he is ready to compete for a regular first-team place in the Eternal City. With the Gers’ on their way to Spain for a ten-day training camp, Gerrard will be hoping he can have as many of his signings in as possible by the time they return to the UK to complete their final preparations for the new campaign.