Frank McAvennie has heaped praise on Rangers midfielder Steven Davis after he equalled the all-time appearance record for Northern Ireland.

Speaking exclusively to Football Insider correspondent Dylan Childs, the former Celtic and St Mirren striker revealed that he thought the 35-year-old was a “great signing” the first and second time he moved to Ibrox.

Davis equalled the benchmark set by Pat Jennings of 119 appearances after he led out Ian Baraclough’s side to face Norway in Monday night’s Nations League clash. 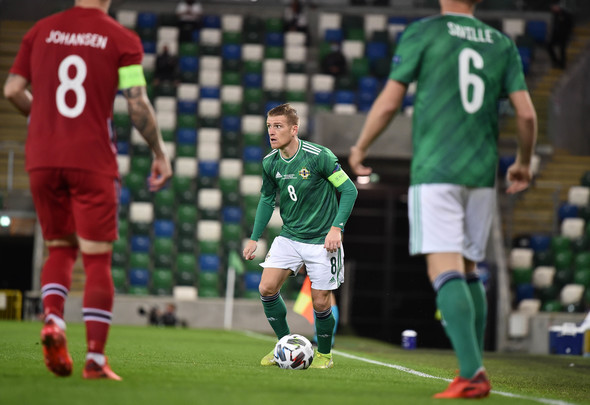 The central midfielder, who has one-year left on his contract in Glasgow, has made 265 appearances for the Gers in two separate spells at the club.

McAvennie hailed the hunger and desire of the midfielder who he has always been an admirer of.

“You have got to say congratulations,” he told Football Insider.

“A player that I thought was a great signing for Rangers the first time and the second time – even better.

“To get that amount of caps is so impressive. To still have that hunger and desire to play for your country is admirable. You have to say well done.”

When speaking on the accolade, Teddy Bears boss Steven Gerrard said: “I have got nothing but admiration for Steven.From someone who knows what you have to sacrifice to get to those sort of numbers, he deserves a lot of credit and all the plaudits that will come his way.

“It just goes to show the standards he sets himself on a daily basis. To still be performing at such a high level at his age, and to still have the hunger and desire to keep breaking these records is incredible.”

In other Rangers news, it can be REVEALED that the club are working on a deal to sign £5m-valued forward on pre-contract.