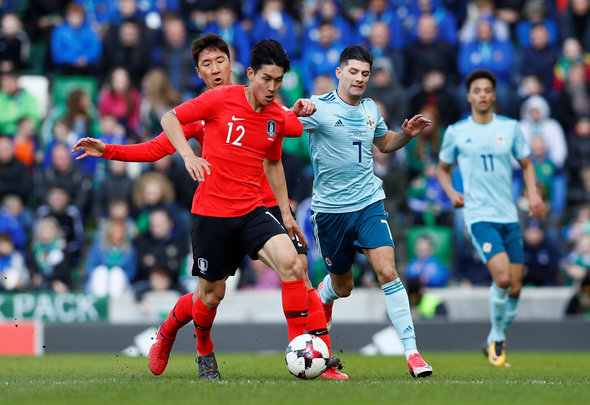 Jones, who signed an Ibrox pre-contract in January, tweeted on his personal account that Tottenham’s Son Heung-min was the continent’s greatest footballer, with former Partick Thistle forward Quitongo arguing in response it is ex-Hoops ace Shunsuke Nakamura.

The conversation then turned into row about their club loyalties, with Jones mocking Quitingo for making his claim just to curry favour with Celtic supporters and telling him to “grow up mate.”

Quitongo told Jones to be “careful” and had a dig at Celtic’s dominance of Scottish football as they close in on their eighth consecutive title in pursuit of the fabled ten-in-a-row.

Jones should know better than to get involved in Twitter rows with a fellow professional over such an innocuous issue. He’s not a green teenager who hasn’t been around the block, he’s a 24-year-old Northern Ireland international who has signed for one of Britain’s most historic and prestigious clubs. There’s no issue with gushing over Son or claiming him the greatest-ever Asian. Nor should there be a problem with Quitongo, a man who knows Scottish football very well, nailing his colours to Nakamura’s mast, even if his claim is partly tongue-in-cheek. Football is all about opinions, and it would be odd if everyone had similar ones. What is not acceptable is insulting Quitongo and urging him to “grow up”. Really? Does Jones need to stoop so low? He would be better off coming up with a witty or pithy response, rather than a pretty lame insult. He’s the one who should grow up.