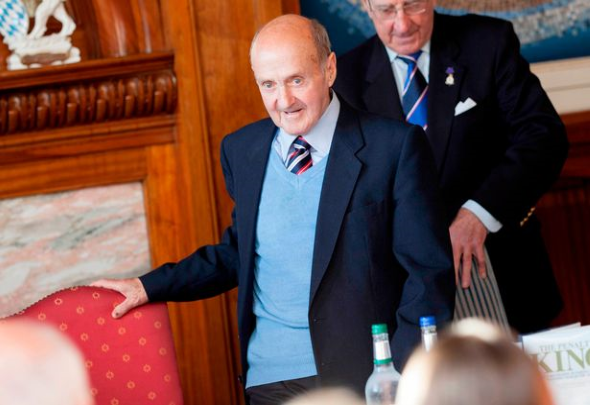 Rangers legend Johnny Hubbard has passed away at age 87 – and Gers fans are heartbroken at the loss of the much-loved Ibrox icon.

The South African signed for the Light Blues in 1949 and was a prolific goalscorer for the Ibrox giants and became the first layer from any African country to play and score in the European Cup.

Hubbard was known as the ‘Penalty King’ after scoring 65 out 68 penalties he took for the Gers on his way to scoring 104 times in 238 appearances before leaving to sign for Bury.

After returning to Scotland before hanging up his boots, Hubbard was a regular sight at Ibrox until relatively recently and was often spotted chatting with fans as he made his way along Edmiston Drive.

Gers fans couldn’t speak highly enough of Hubbard, most of whom have only ever seen clips of the South African, as they paid tribute – with one saying

RIP Johnny Hubbard a true legend. This is him scoring v Celtic in what Sir Alex Ferguson called the greatest goal he had ever seen. No bigger compliment is needed pic.twitter.com/xtVhDGTTbM

Very sad news that Johnny Hubbard has passed away. Epitomised a Ranger & all who met him undoubtably were enriched just to be in his company. Sleep easy legend.

Gutted to learn of the passing of a genuine Rangers legend. Johnny Hubbard was a real gentleman and I had the good fortune to meet him a couple of times. Loved his stories of bygone days. Sleep easy Mr Hubbard 💙💙 pic.twitter.com/GaiB22pb9T

RIP Johnny Hubbard. Sums the man up that everyone from my generation holds him in such high regard.

The word LEGEND is so easily passed about today. But we lost a true blue a 100% legend and gentleman.
Rest in peace Johnny hubbard
And thank you.

Hubbard had a brief spell with Ayr United after playing for Bury but it was at Ibrox where he enjoyed the best football of his career.

To this day, Hubbard remains the only foreigner to score a hat-trick for Rangers in an Old Firm clash after netting three against the Hoops in the Ne’er Day meeting in 1955.