John Kennedy can have no complaints with Callum McGregor’s sending-off in Rangers’ 4-1 thumping of Celtic, according to Keith Hackett.

Speaking exclusively to Football Insider, the ex-FIFA and Premier League referee heaped praise on Nick Walsh for his display in what was his first Old Firm fixture.

McGregor received his first caution for a challenge on Ryan Kent after 24 minutes and was shown a second yellow just two minutes later. Walsh played advantage for the second incident that led to Rangers opening the scoring through Kemar Roofe.

Speaking after the game Kennedy told Sky Sports, via the Sun, he had a problem with the first yellow as he insisted it was not reckless.

“What he’s done is kick his right leg. He’s beaten by a bit of skill and stopped him.

“The referee has awarded a free-kick, he’s stopped an attack, that’s a mandatory yellow.

“I listen to a lot of opinions from managers and even pundits this week that think just because you’ve got the ball at some point you can’t commit a foul challenge.

“The second yellow was a bolt-on yellow. No question.

“The referee is looking, he’s close by, he’s seen it. He’s going to blow and he doesn’t and plays advantage.

“It’s a piece of advantage and he rightly goes back, cautions and sends off the player. 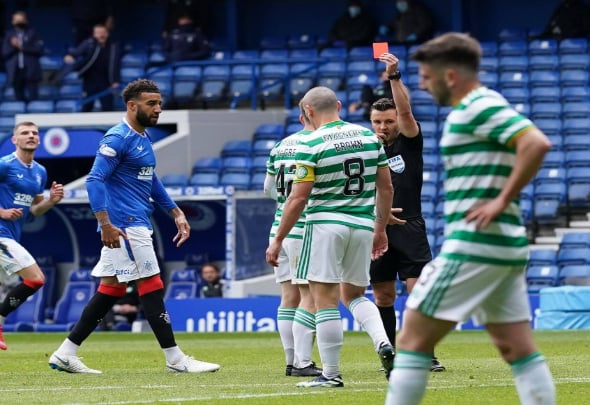 “I see no criticism for the referee. Only praise.

“What players have got to understand is that when you’ve got a top-class referee who’s in form and refereeing as well as this. These are good pieces of refereeing.”

In other news, a Liverpool attacker has been tipped to dazzle at Celtic next season after a big reveal.