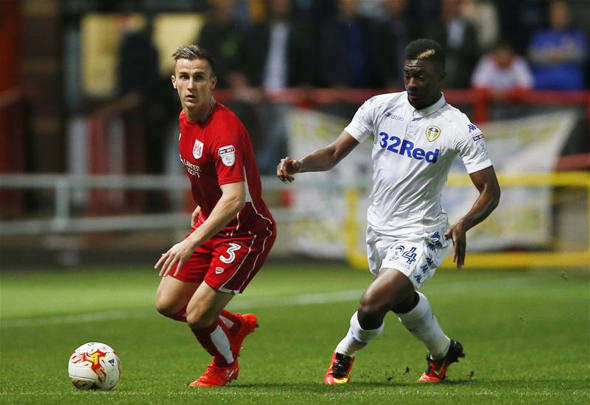 Hadi Sacko thanked Leeds fans for their support following the 2-0 defeat against Liverpool on Tuesday evening.

The Yorkshire giants fell to goals from Divock Origi and Ben Woodburn in the quarter-final stage of the EFL Cup at Anfield.

Sacko, 22, started the match on the right hand side and played the full 90 minutes of the clash against the Reds.

Following the match the winger took to his personal Twitter account to air his disappointment at the result, while also paying tribute to the Leeds support.

Gutted about the result, but still an amazing experience.. thanks to the fans who travelled and sang all game long #greatatmosphere #MOT

Despite the result Leeds will still have been proud of where they finished in the cup competition.

It only the second time in 20 years that they have reached the quarter-final stage and losing away to an in form Liverpool side will not be frowned upon.

They will now turn their attentions to their league campaign with a big fixture against Aston Villa coming up on Saturday.

The Midlands outfit are unbeaten under manager Steve Bruce and they will provide a stern test for Leeds, who are targeting promotion in fifth place.

A win could see Garry Monk’s side move up to fourth in the league table, but a defeat could see them drop out of the play-offs and into ninth.

In other Leeds news, we have looked at why Sacko is underrated this season.