Marcelo Bielsa has been tipped to remain at Leeds United beyond his current contract and put any interest in Rangers boss Steven Gerrard on hold.

Speaking exclusively to Football Insider correspondent Dylan Childs, the former Arsenal and Everton striker Kevin Campbell claimed the Argentine prefers not to overcommit but has a special attachment to Leeds.

Bielsa is a quarter of the way through his third season at Leeds, where he has overseen a remarkable transformation and taken them back to the Premier League.

He has eight months remaining on his contract at Elland Road after committing only to a one-year deal in September.

It was only finalised days ahead of the current campaign following the extensive negotiations that is Bielsa’s hallmark.

Football Insider revealed last week that club chiefs have set their sights on Gerrard for a third time as they prepare for the possibility of Bielsa leaving next summer.

Rangers are well clear at the top of the Scottish Premiership after an outstanding start to the season in which they are unbeaten in all competitions.

When asked by Football Insider if he believes Bielsa could be replaced by Gerrard at the end of the season, Campbell said:

“I see him staying at Leeds beyond this season. With a man like Bielsa, he just does not want to overcommit because if ever the landscape changes, he has got his out.

“He does not want to be stuck in a long-term contract where it has to be thrashed out. It is a smart way to do it.

“He has made a massive difference to that club. He has rejuvenated Leeds United, the city, the players.

“Not a lot of people knew these players but they are taking notice now.”

Leeds have become many neutrals’ second team due to the swashbuckling attacking style of their play under Bielsa.

They are 14th in the Premier League after nine matches after being involved in some thrilling clashes in which they have not often got the results their performances deserved.

In other news, Neil Warnock is fuming over the antics of a Leeds United star. 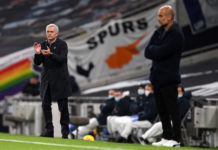