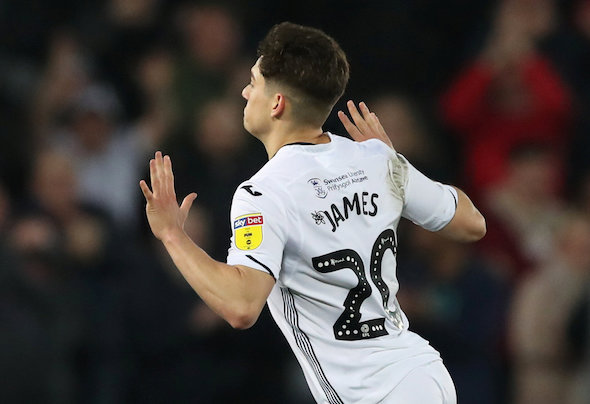 Noel Whelan has hailed Daniel James’ “brilliant” performances and outstanding professionalism as he closes in on a blockbuster Manchester United transfer.

Speaking exclusively to Football Insider, the ex-striker claimed the winger, 21, could have be badly damaged by Swansea City pulling the plug on his January transfer to Leeds United at the eleventh hour.

James underwent a medical at Leeds and had agreed terms as he waited to sign a loan-to-buy contract before Swansea made a shock late U-turn.

The Wales international returned to the club and produced a series of dazzling performances to prompt a stampede of interest from Premier League clubs led by United, who have agreed the terms of a deal with James and he is set to complete a £15million transfer in the coming days.

“He has had a fantastic season, and been excellent in recent months” Whelan told Football Insider. “He was brilliant after what happened at Leeds, so professional. That kind of thing can really damage a player and be so detrimental, especially a young one making his way in the game.

“The way he has gone about his job since failing to join Leeds has been commendable. He’s showed great attitude and character, and that’s something Man United will have taken into account.

“He’s a real talent. He’s got pace most players would love to have, that’s what’s scary for defenders. He’ll get in behind them, has fantastic ball manipulation and has all the trademarks of a Premier League player.

“Whether he can handle the pressure, time will tell. It will take a bit of time to adapt as there is a big gulf between the Championship and the Premier League.”

James scored his first Wales goal in March and ended the season on a high at mid-table Swansea, with his 38 appearances yielding five goals and 10 assists.