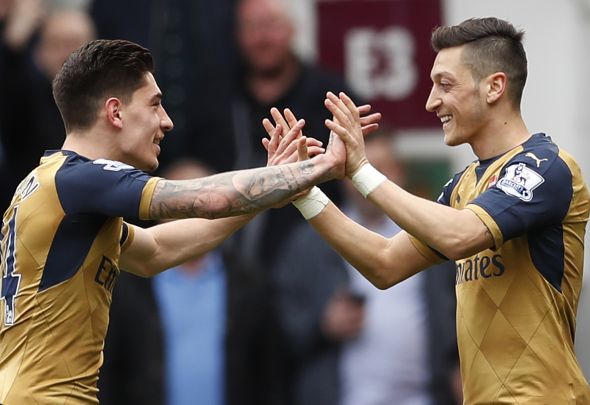 Hector Bellerin has called for Arsenal to produce the kind of football that saw Mesut Ozil score against Bayern Munich last season.

The Gunners faced Bayern in the group stage last season, beating the German champions 2-0 as well as losing 5-1 at the Allianz Arena in the reverse fixture.

Posting a video on his personal Twitter account, Bellerin is desperate to see the Gunners replicate the kind of form that saw Ozil strike during Arsenal’s 2-0 win in the group stages.

Never an easy game in the @ChampionsLeague. Let's aim for more of this again @MesutOzil1088 💪 #COYG pic.twitter.com/7fI7KI0QXx

The Gunners finished second in last season’s Group F, with Ozil and Olivier Giroud scoring against Bayern to secure their place in the knockout stage of the Champions League.

Arsene Wenger’s side have drawn the German champions in the knockout stage of the Champions League for the third time in the last five years.

Arsenal will travel to the Allianz Arena on February 15, before Bayern travel to England in the second leg on March 7.

Both Ozil and Bellerin are likely to feature for the Gunners against Carlo Ancelotti’s side after Christmas, and will hope to link up as they did in last season’s clash.

Germany international Ozil has been in sublime form this season, scoring nine goals and supplying six assists in 20 league and cup encounters.

Bellerin, a three-time Spain international, made his belated return from injury against Stoke on Saturday during the 3-1 win at the Emirates after coming off the bench to replace Skhodran Mustafi.

Arsenal next face Everton at Goodison Park on Tuesday night, as they look to close the gap on Premier League leaders Chelsea with all three points.

In other Arsenal news, ex-defender Lauren has claimed Arsenal can knock Bayern out in February.