Alan Hutton has heaped praise on Celtic midfielder Callum McGregor for his “relentless” form since the winter break.

Speaking exclusively to Football Insider, the former Rangers defender suggested that the 26-year-old was a key component in the Hoops’ impressive winning streak at the moment.

Neil Lennon’s men made it eight victories on the bounce in all competitions with a 5-0 demolition of Hearts on Wednesday night – a result that allowed them to open up a 10-point gap over their bitter city rivals at the top of the Scottish Premiership table. 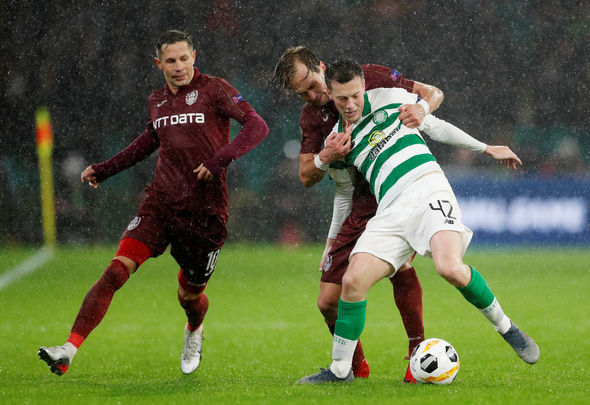 But Hutton has been awestruck by the eye-catching form of Scotland international McGregor in particular.

“He’s been brilliant,” he told Football Insider. “He’s literally been relentless since the winter break.

“I think the best thing for Celtic was probably the defeat to Rangers to see what they needed to do. They’ve really kicked on again and gone from strength to strength.

“He’s a main part of what they do. He chips in with goals, he can see a pass, he can run all day – he’s a main player for them.

“He really makes them tick.”

McGregor was on the scoresheet again for Lennon’s side against Hearts, taking his tally to 10 goals for the season in all competitions, with two in his last two outings.

The central-midfielder also has nine assists to his name, with six in his last seven Scottish Premiership appearances, including a brace against Motherwell last week.

In other Celtic news, Ex-PL striker claims £10m ace wanted by Hoops can be their next Scott Sinclair.