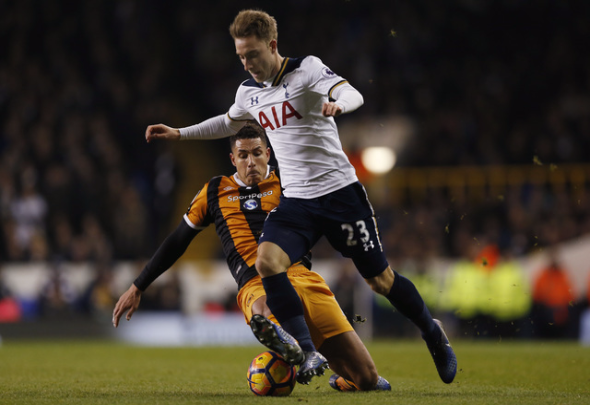 Glenn Hoddle singled out Christian Eriksen as an underachiever in the aftermath of Tottenham’s Europa League exit.

Spurs drew 2-2 against Gent at Wembley on Thursday night but crashed out of the competition due to a 3-2 aggregate deficit over the two legs of the last-32 clash.

Tottenham are challenging strongly for a top-four Premier League finish and are in the quarter-finals of the FA Cup but Hoddle identified a weak point in their team.

“They’re lacking a creative player,” said Spurs legend Hoddle after the match to BT Sport 2. “When things are tight for Tottenham, I don’t see people stepping up.

“I think Eriksen has got to do more against the top teams. They’re holding themselves back as a squad. When you think Janssen and Sissoko, £50million between them and neither of them comes on. That sort of money is spent on players who go on and change a game, and I don’t see that here.”

Eriksen was one of Spurs’ key players on Thursday, scoring the opener after 10 minutes with a cool one-on-one finish and setting up Victor Wanyama for the second with a delightful flick.

The Denmark international has a fine scoring and assists record for Tottenham and is an established member of their starting XI but there is a school of thought among supporters that he does not produced the goods often enough in the marquee matches.

That appears to be a view shared by Hoddle, who managed the Londoners and is also considered one of the greatest players in the club’s history.

Tottenham are next in action on Sunday when they host Stoke in the Premier League as they aim to continue their quest for a top-four finish.