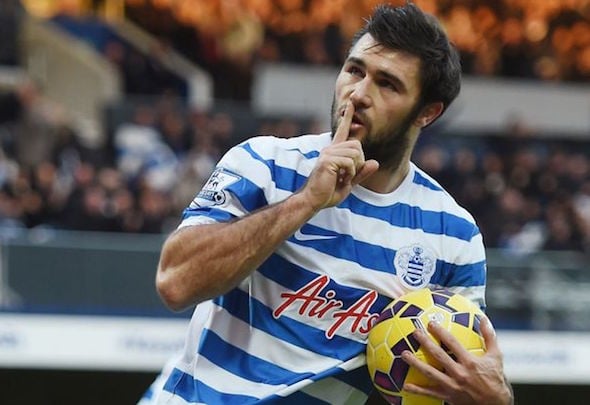 By London correspondent Tony Hughes
Ian Holloway has hailed QPR striker Charlie Austin as the best player in the Championship.
The prolific striker scored twice for Rangers on Tuesday night as they came from two goals to draw 2-2 against leaders Brighton at Loftus Road.
It was Austin’s first start for the west London club since November due to a calf problem.
Austin has now scored 10 Championship goals in 12 starts this season and former Rs manager Ian Holloway is in no doubt about the 26-year-old’s calibre.
Speaking on Sky Sports after the Brighton match, Holloway was impressed with how Austin brushed aside the attention of Brighton’s Spanish defender Bruno to rescue a point for his team.
“If you watch this, his strength and ability, he knows where that goal is,” observed Holloway. “Bang. Unbelievable.
“You watch him hold off (defender) Bruno. Little scrap there. Look at that for a header. He hardly ever misses the target.
“I’m so impressed with him. I think he’s the best player in the division.”
Austin’s continued prowess in front of goal will increase speculation that QPR will sell him in January rather than risk losing him for nothing at the end of the season when his contract is due to expire.