Alex Bruce admits it is no surprise to hear that Celtic are in the hunt to sign Hearts sensation Aaron Hickey this summer.

Speaking exclusively to Football Insider assistant editor Russell Edge, the former Kilmarnock man admits he has been blown away by the left-back’s performances considering his age.

With Hearts facing the prospect of relegation to the Scottish Championship, 90 Min claim that the Hoops are set to beat Premier League sides in the race to sign the 17-year-old. 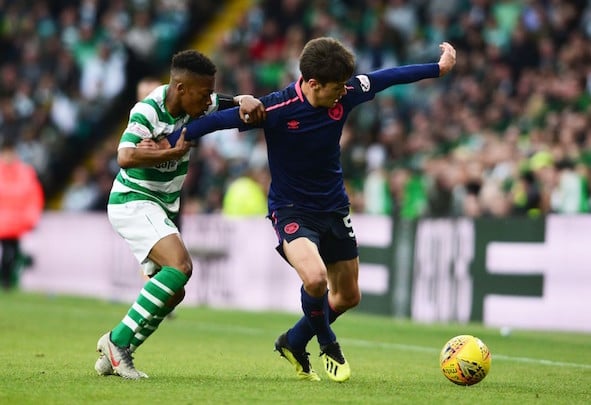 Hickey, who has come through the youth ranks at Hearts, actually spent a year with Celtic’s under-17 side between 2017 and 2018 but ended up returning to the Edinburgh-based side.

Having seen the left-footed youngster play 30 games across all competitions this season, including 22 Premiership matches, Bruce has tipped Hickey to make a big impact at the top end of Scottish football.

“He’s a little bit up and down in terms of his level of performance because of the age he’s at but there’s no doubt about it, he’s a big prospect, he’s got huge attributes.

“It wouldn’t surprise me if one of the Old Firm comes and snaps him up because he’s a very, very good prospect up there. He was linked with Man City at one point earlier in the season, that tells you a little bit about him.”

Hickey, who made his Hearts debut last season, started the season as Craig Levein’s first-choice left-back but was sent off on the opening day of the year.

Having missed one game through suspension, injury was the only thing kept him out of the side as he sat out just seven matches for the rest of the Premiership campaign.

In other Celtic news, Bruce has tipped a Hoops left-footer to join a top-six English side this summer.