On-loan Celtic winger Patrick Roberts has made a comparison between Hoops boss Brendan Rodgers and the manager of his parent club, Pep Guardiola of Manchester City.

Speaking to Celtic’s official website, Roberts said “Pep and Brendan Rodgers are both huge managers in the game of football.

“It’s great to learn of these coaches and develop my game.

“He (Brendan Rodgers) tries to play football at every opportunity and encourages us in every game to play, even when we’re under pressure and he’s installed that in every player, which is important.”

Roberts featured for City in pre-season before making his return to Celtic Park, and reports have suggested that Pep Guardiola vetoed an £8million permanent transfer between the clubs in the summer, as he decided that the player still had a future at Manchester City.

Roberts had a superb season for Celtic last year, playing a huge part in the club’s first domestic treble since 2001 and the first unbeaten domestic season in over 100 years.

Celtic have since gone on to set a new British domestic unbeaten record of 63 games, and Roberts played a part in the very first of those games, scoring in what would prove to be Ronny Deila’s last game in charge as Celtic manager.

In other Celtic news, Kris Commons has pinpointed the secret of Brendan Rodgers’ success 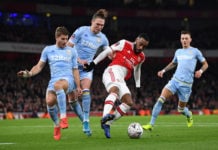