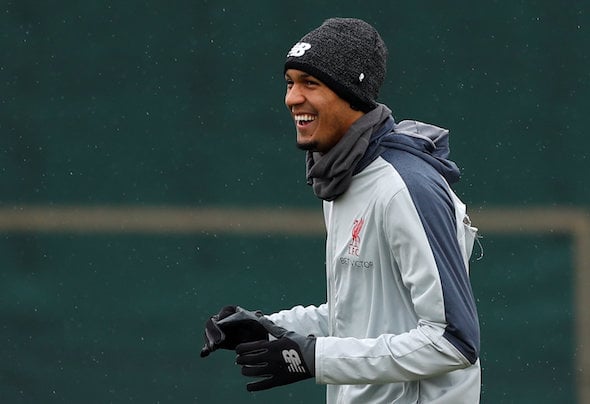 Jurgen Klopp is making a “huge mistake” if he axes Fabinho from the Liverpool team that faces Barcelona on Wednesday night, according to Noel Whelan.

Speaking exclusively to Football Insider, the former Leeds United and Coventry City striker has grown into a big admirer of the midfield anchorman signed from Monaco last summer.

Fabinho has established himself as a lynchpin of the team since the turn of the year after initially struggling to make an impression in his first few months at Anfield.

However, the Brazil international has often been overlooked for marquee fixtures, including the Premier League win over Tottenham last month, and he was benched for the recent triumph at Cardiff City.

Fabinho suffered a head injury soon after joining the action as a substitute in Wales and was omitted for the subsequent demolition of Huddersfield, but he’s been named in the travelling squad for the Champions League semi-final first leg in Spain.

“I would be shocked if Fabinho doesn’t start and I think it would be a huge mistake if he’s not in the side,” said Whelan to Football Insider. “Away to Barcelona is one of the toughest fixtures in football and you need ball winners in midfield who can deny space to the opposition.

“Fabinho is brilliant at nicking the ball, turning over possession and launching attacks. He’s got a great passing range, too, and he would be my first pick in midfield.

“He’s ideal for this type of game, in which you need a strong defensive base, and I would go with him in midfield with [Jordan] Henderson and probably [Georginio] Wijnaldum.”

Fabinho has made 36 appearances for Liverpool, including 19 Premier League and four Champions League starts.

Klopp is likely to select three out of Fabinho, Henderson, Wijnaldum, Naby Keita and James Milner in central midfield for the mouthwatering showdown at Camp Nou.

In other Liverpool news, , an Anfield attacker is in advanced talks to transfer clubs after rejecting new long-term contract in recent days.