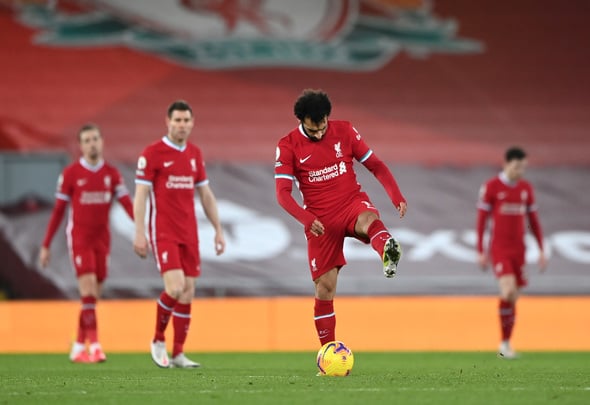 Noel Whelan is incensed by the pictures of Liverpool forward Mohamed Salah in conversation with Manchester City’s Riyad Mahrez at full-time on Sunday.

The former Leeds United striker, speaking exclusively to Football Insider, claimed the pairs’ embrace was “the last thing” Liverpool fans needed to see after a disappointing 4-1 loss at Anfield.

Salah and Mahrez were pictured in conversation shortly after the full-time whistle on Sunday, with Sadio Mane also in close attendance.

It was Liverpool’s third consecutive home loss and Jurgen Klopp’s side are now 10 points off top-of-the-table Manchester City, who also have a game in hand.

Whelan questioned the mentality of the modern day player after what he saw at Anfield.

“Honestly, this is something that I really hate,” he told Football Insider.

“You have just lost in a massive game and the last thing people needed to see on TV was that. You should be gutted about the defeat because the title has probably now gone.

“I do not understand people’s mentality. I remember Roy Keane talking about opposition players talking to each other in the tunnel and I agree, you should have your game head on.

“I guess it is just a different mentality these days. There are different characters.”

Speaking after the 4-1 loss, Jurgen Klopp told Sky Sports: “That (the top-four) is of course our main target, that is clear.

“We will try everything. There is enough games to play to secure that – but we have to win games and tonight we didn’t.”