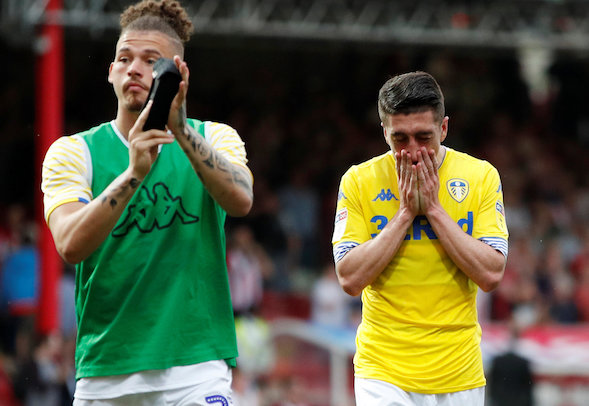 Noel Whelan fears Leeds United will cash in on Kalvin Phillips amid growing interest in him from the Premier League elite.

Speaking exclusively to Football Insider, the ex-United striker insisted “everyone would want him to stay” but is concerned that the club would be unable to reject a major offer for the midfielder.

Phillips was named in the official Football League team of the season and was also named Leeds’ player of the year in the face of stiff competition.

Football Insider revealed today Norwich City are preparing a “significant” bid for Phillips along with offers expected from Bournemouth and Southampton.

“Kalvin Phillips is a Leeds lad, I would like him to stay, everyone would want him to stay,” Whelan told Football Insider. “He is integral to the club and to lose him would be a massive blow.

“He’s been consistent all season and plays a specialist role really well. He’s matured as a player and I know for a fact there will be Premier League clubs looking at him.

“Yes, he’s on a contract but contracts mean nothing. Money speaks louder than anything else. If Leeds get an offer that is attractive to them, you can see him leaving.”

Phillips graduated from the club’s academy to establish himself in the Leeds team and has been a regular under multiple different managers over the past four seasons.

The 23-year-old has a contract at the club that runs until the summer of 2021.

In other Leeds United news, it can be REVEALED that Norwich City are preparing a “significant” bid for a Whites player.