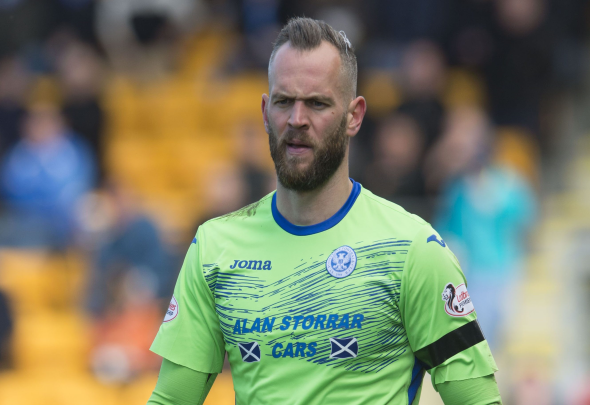 St. Johnstone goalkeeper Alan Mannus has claimed Rangers should have had neither the penalty or the free-kick they scored from in Tuesday night’s 4-1 win over the Saints.
Mannus brought down Alfredo Morelos after 12 minutes before James Tavernier buried the resulting spot-kick to give the Gers the lead.
Just before half-time Sean Goss scored the Gers’ third from a fantastic free-kick on the edge of the penalty area when Murray Davidson had fouled Jamie Murphy.
Both looked to be pretty clear fouls despite Saints players claiming they had “won the ball” but Mannus insists otherwise.
“The first goal isn’t a penalty and the third goal isn’t a free-kick,” Mannus said, as quoted by The Scotsman.
“For the penalty, I felt the ball touch my leg. He [Morelos] touched it first and it’s touched my leg and then we’ve gone into each other.
“What am I meant to do? Just move out of the way for him once it’s touched my leg. We were looking at the replay to see if it was clear that it did touch me, I felt it did after he hit it but we couldn’t see if it was clear on the replay. But I was certain it did, so for me as it hit my leg it was a corner and not a penalty.”
The win over the Saints was the Gers fifth consecutive win as they continue to close the gap on Scottish Premiership leaders Celtic and make a late surge for the title.
Alfredo Morelos and Josh Windass also got on the scoresheet for the Hers before Jason Kerr grabbed a consolation for the hosts from a corner.
Graeme Murty’s side were dominant against the Perth side as they put in another great performance just a few days after arguably their best home performance of the season against Hearts on Saturday.
The Gers are back in action on Sunday when they face Falkirk in the quarter-finals of the Scottish Cup at Ibrox.
In other Rangers news, Graeme Murty has revealed this Rangers star was angry and frustrated after the win over St. Johnstone
Don’t miss out on breaking and exclusive Leeds news by clicking here for our brilliant 24/7 updates on Facebook, Instagram and YouTube.