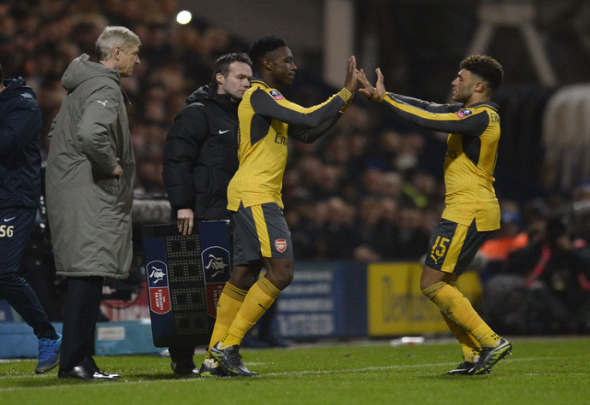 Ian Wright believes Danny Welbeck can “definitely contribute goals” to Arsenal after he made his return from injury during the 2-1 FA Cup win at Preston.

The 26-year-old had been out of action for up to eight months after suffering a knee injury at the back of end of last season.

He made a seven-minute substitute appearance at Deepdale as the Gunners came from a goal down to progress through to the fourth round of the FA Cup.

Arsene Wenger’s side conceded a goal after seven minutes when Callum Robinson slotted home after poor defending from the away team.

But goals from Aaron Ramsey and Olivier Giroud after the break ensured the north London club didn’t crash out to the Championship outfit.

After the game, former Premier League player Wright stated whether Arsenal have enough strikers at the club as he delivered his verdict on the returning Welbeck.

“I think that will be enough for now to maintain the challenge,” Wright told BT Sport. “Hopefully Danny will be able to remain fit until the end of the season because he will definitely contribute goals to the team.”

Former Manchester United academy graduate Welbeck has been hit by injuries during the last few seasons.

He made his first appearance of the campaign at Preston after playing only 15 games in all competitions last term where he scored five goals.

If he is to return to the starting XI then he must fight his way into the first team picture with three attackers ahead of him in the pecking order.

In-form forward Alexis Sanchez is the first choice under Wenger, with Frenchman Giroud, who has scored in his last four games behind the Chilean and then summer signing Lucas Perez.

In other Arsenal news, supporters react on Twitter to Aaron Ramsey’s display against Preston.