Noel Whelan has suggested Alfredo Morelos’ suspension at Rangers contributed to the shock defeat to St Mirren on Wednesday.

The former Aberdeen and Leeds striker, speaking exclusively to Football Insider assistant editor Russell Edge, believes the Colombian’s behaviour and retrospective punishment brought an air of negativity to Ibrox ahead of the League Cup tie.

Morelos, 24, was handed a two-game ban by the SFA after being charged with violent conduct in last weekend’s win over Dundee United.

As a result, the striker was forced to watch on from the sidelines as the Gers’ slipped to a 3-2 defeat against St Mirren in what was their first loss of the season.

However, despite Morelos playing no part for Steven Gerrard on Wednesday, Whelan has still laid some of the blame at the Colombia international’s feet.

“I think what you find is that when you have something like that off the field, look at the result that happens as well,” Whelan told Football Insider.

“I think it all ties into one. When you get a little bit of negativity that’s happened and disciplinary for a stupid challenge like that, then you go and get beaten, is it a coincidence?

“It’s just negativity that is brought to a club when you don’t need it. Then you get knocked out the cup, 3-2 against St Mirren, so it all ties in. You can’t be having players doing that. 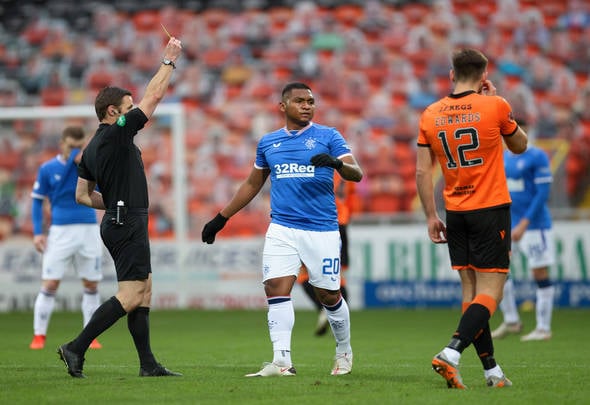 “It’s cowardly, it’s petulant, it’s stupid and just when we thought that childish behaviour in his game had gone and had been ironed out by Steven Gerrard, it raises its ugly head again. Now he’s out for two games, right when you need all your players as well over this Christmas period and when you’re on a good run of form.

“When that happens, you then get a bad result. So, on two levels, you’re missing a really, really good player, you’re bringing negativity to the club, and then you get a defeat off the back of it as well.”

In other news, Rangers have been tipped to pull off a Ryan Kent-style signing after huge January reveal.