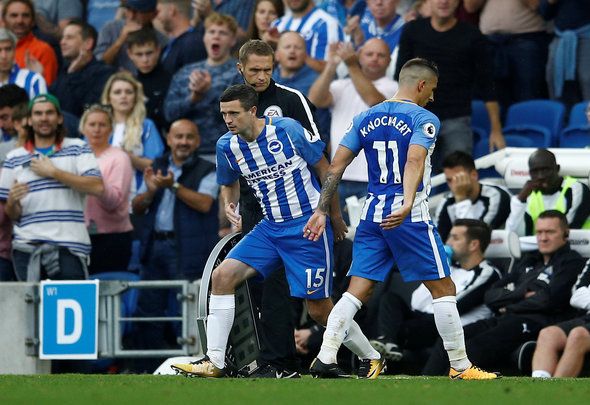 Rangers have secured the signing of Brighton and Hove Albion midfielder Jamie Murphy on loan till the end of the season, a deal that will become permanent in the summer, according to an insider source.
Heart & Hand – a reliable source of information for Rangers, released the news on its Twitter page on Saturday afternoon.

Hearing Murphy deal is loan till end of season then perm.

No official confirmation has been given by the Scottish Premier League side.
There had been fears earlier today that a deal between the two parties had broken down after the 28-year-old failed to board a plane that was taking Graeme Murty and co. to Florida.
Murphy has only made six appearances for Brighton this season in all competitions, scoring one goal and is seemingly surplus to requirements in the south coast.
According to a report in the Daily Record, a fee between Rangers and the Seagulls had been agreed but it would now appear as though it is the loan route the clubs have decided to take.
The SPL side do not return to action until the Scottish Cup tie against Fraserburgh on the 21st January which means that the player will have plenty of time to get used to his new teammates.
Football Insider verdict:
This sounds as though it is a done deal. The player has not featured often for Brighton and it would appear Chris Hughton sees no need for the midfielder. He will be a Rangers player one way or another, on-loan or permanently. This will be a relief to Rangers fans after it looked like the deal might be going belly-up, and a loan deal now that becomes permanent in the summer is just as good for the Ibrox faithful.
In other Rangers transfer news, Ross Lyon leaves for League One side.
We’ve launched a << BREAKING NEWS FEED>> exclusively for your club. ‘Like Us’ on Facebook by clicking here if you want 24/7 updates on all Rangers breaking news.