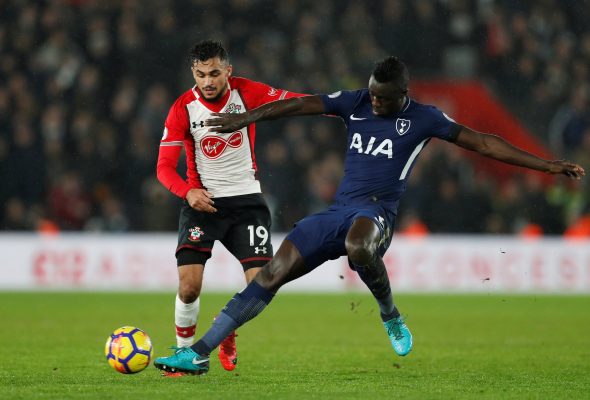 Tottenham defender Davinson Sanchez has said that his happiness and regular football is more important than money when discussing a potential transfer exit from the club.
The Columbian international arrived in north London in a reported £42million transfer deal from Ajax last summer, and has gone on to establish himself as a regular among the first team.
With 30 appearances across all competitions under his belt, including turning out in every minute of the club’s as-yet unbeaten Champions League campaign, he is a firm favourite of both the supporters and Mauricio Pochettino.
However his fine displays have reportedly caught the attention of European giants Real Madrid, but his response to such transfer speculation will come as music to the fans’ ears, as he pours cold water over a move any time soon.
He told the Daily Express: “I do not think about money or where it is.
“Right now, here in Tottenham I am very good. I am playing every three to four days. I am being important in the team.
“As big as Madrid is, no matter how big a team are, that has won what they have won, if the conditions are not favourable for me, unfortunately I cannot accept.”
Sanchez, a seven-cap Columbian international, will be battling it out with Jan Vertonghen and Toby Alderweireld for the rest of the season, although Pochettino may well choose to implement a back three as he did earlier in the campaign.
Football Insider verdict
Sanchez has said all the right things over a potential move away from Spurs, and despite being just 21-years-old, he appears to have a wise head on his young shoulders. He recognises that at his age, playing regular football for a top side is both a rarity and important to his development, and that a move to Spain may well take that first team action away from him. Tottenham fans will love this from their star man, and would certainly hope that others can follow in his footsteps. However, not everyone is so disinterested in the money, and if Daniel Levy does not start paying up, Sanchez may well see his team mates depart for greener pastures.
In other Tottenham news, it can be exclusively revealed that a centre-back has agreed contract terms with Spurs.
Don’t miss out on breaking and exclusive Tottenham news by clicking here for our brilliant 24/7 updates on Facebook, Instagram and YouTube.